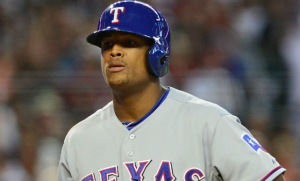 Despite missing several key players due to injury, the Texas Rangers have managed to get things turned around after a sluggish start to the season. The Rangers have won seven in a row to pull back to .500, giving them hope that they can still finish on top of the AL West for a third straight season. One thing that could help them stay hot is getting Adrian Beltre, their most impactful offensive player last season, back from the DL. Beltre told reporters Tuesday that he’s making progress in his return from a strained calf even though there is still no set date for his return.

“It’s on the right track,” Beltre said of the calf injury. “I just have to make sure my legs are in shape and not to have any setbacks. So far, the plan the trainers have for me has been working, and I’m trying to follow that plan.”

Beltre is yet to make his season debut for the Rangers, which may have played a role in the team’s slow start in April. He initially hurt his calf during spring training, at which point the Rangers were hopeful he’d only miss the first week or two of the regular season. However, the 38-year old aggravated the injury by trying to come back too quickly, keeping him on the shelf for an extended period of time. Beltre now believes it’ll be two or three more weeks until he’s ready to play.

“There is no date yet,” Beltre said Tuesday. “There is a little improvement. We are on the right track, slowly.”

The veteran third baseman admits to being frustrated at being on the DL, a place he’s only been on three other occasions since signing with Texas in 2011. However, he’s starting to feel optimistic that his injury is healing and he’s getting closer to getting back on the field.

“I’m improving,” said Beltre. “Obviously, the team is playing better. It’s nice to see them back here and playing the way they have. I’ve seen some improvement, and I’m excited about what’s coming in the next two or three weeks.”

Beltre began taking batting practice and fielding ground balls last week, and on Tuesday he was able to run on grass for the first time since he re-aggravated his calf injury last month. At some point, Beltre will be sent out on a minor league rehab assignment. Based on Beltre having so few at-bats this spring, he may need an extended rehab assignment, which could further delay his return to the Rangers.

Of course, if the Rangers wanted to rush Beltre back a little, they could simple place him in the DH spot until he’s ready to play third base full time. With Carlos Gomez expected to miss at least a month of action, the Rangers have a vacancy in their outfield. Despite wanting to protect Shin-Soo Choo from injury by having him serve as the team’s primary DH, the Rangers could move Choo to the outfield in place of Gomez, opening up the DH spot for Beltre.

In the meantime, the Rangers will continue to get by with Joey Gallo at third base. Gallo has been an all-or-nothing hitter this season, mashing 12 home runs for the Rangers but hitting just .195. Nevertheless, he’s managed to impress the man he’s replacing for the time being.

“He has been great,” Beltre said of Gallo. “What has impressed me the most is the way he has played defense. It has been unbelievable.”

Just a week or two ago, the Rangers looked to be heading towards a lost season. However, Texas has shown great resiliency, overcoming a slow start and several key injuries. With the Rangers finally playing well, the possibility of getting Beltre back by the end of the month or in early June could give them a huge lift, both physically and psychologically, putting the team back on track toward competing for its third straight division title.