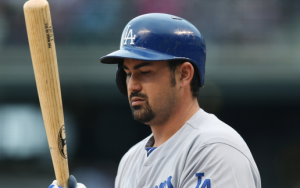 First baseman Adrian Gonzalez was not in the starting lineup Sunday, as the Los Angeles Dodgers lost their third straight game to the Pittsburgh Pirates, a disappointing set back after the team’s recent six-game winning streak. Gonzalez will also be absent from the lineup Monday afternoon, as the Dodgers try to avoid getting swept by the Pirates. Manager Dave Roberts says he is giving Gonzalez two days off to “reset” his offensive approach, and hopefully his season.

“It’s just to give him a mental blow, a couple days where he can sit back and watch and be ready to come off the bench,” explained Roberts after Sunday’s game, during which Gonzalez grounded out in a pinch-hitting appearance. Roberts added, “You look at over the last couple weeks, he’s not swinging well and it’s just good to get away. It’s kind of been some of the swings, something ultimately I felt a couple days away would be good for him. It’s the overall approach, and the results, too. Hopefully a couple days will allow him to reset.”

The 34-year old Gonzalez is having his worst offensive season since he first broke into the big leagues with the Texas Rangers more than a decade ago. He’s hitting .262 with six home runs and a disappointing OPS of .706. Perhaps more importantly, he has just three hits over his last 23 bats. Scott Van Slyke started at first base on Sunday and is in the lineup there again on Monday.

Roberts cites the extreme infield shifts Gonzalez is seeing from opposing clubs as part of the reason for his struggles. “If you see three infielders on the right side of the infield and you’re not getting hits, logic says that if I can put the ball on the ground the other way, then I can get a hit,” Roberts explains. “That’s kind of what the shift does for the mentality, the psyche of a hitter. That’s part of the strategy. And if you can play into a hitter’s psyche — to maybe deviate from what they want to do or to try to hit the ball out of the ballpark — then it plays to the psyche of the defense.”

Roberts believes that Gonzalez is trying too hard to overcompensate for the shift by trying to hit the ball the other way; instead, the Dodgers manager wants his first baseman to keep trying to drive the ball through the shift on the pull side of the infield. “Sometimes hitters,” Roberts says, “when they’re trying to get going again, they want to see the ball a little longer and see the whole field. Sometimes that causes you to be late on fastballs. I think that is the byproduct.”

The Los Angeles skipper also rejects the thought that Gonzalez is in his decline as a player. “He’s always been streaky. I have no doubt he will come out of it and slug the way he can,” Roberts said. “The process needs to be more balls hit to the pull side. I definitely don’t think this is the new normal for Adrian. This is not what I envision for Adrian and I’m not too concerned on the offensive side. The shape he keeps in, the intelligence, the approach, I am certain this is not the new normal.”

The Dodgers better hope this is not the new normal for Gonzalez, as he is owed $21.5 million in both 2017 and 2018 before his contract expires. In the more immediate future, the Dodgers will need Gonzalez to bust out of his slump if they hope to trim their eight-game deficit in the NL West or make a serious push for a wild card spot. The plan is for Gonzalez to return to the lineup Tuesday night when the Dodgers begin a series against the Milwaukee Brewers.