Andrew Toles Out for the Season After Tearing ACL 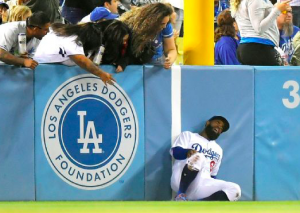 The injuries won’t stop piling up for the Los Angeles Dodgers, and the most recent one may be the most damaging to date. The Dodgers announced Wednesday night that outfielder Andrew Toles will miss the rest of the season after tearing the ACL in his right knee.

Toles suffered the injury Tuesday night while sliding awkwardly into the left field wall at Dodger Stadium trying to make a catch. Toles will have surgery to repair the ligament in two weeks. Rehab for the injury is expected to be at least six months, meaning Toles should be ready for spring training next season but is finished in 2017.

“I was close to the wall. I was going to dive, but I realized I was going to go right into the wall,” Toles described. “I accelerated at the last second and stopped really quick on the dirt, and my leg gave out. I didn’t hear a pop or anything. How do I put this? It was an awkward hyperextension.”

The injury comes at a terrible time for Toles personally, as the 24-year old was continuing to assert himself as an important part of the Dodgers lineup. In a part-time role last season, Toles hit .314 with an OPS of .870. He’s played primarily against right-handed pitchers this season but has continued to be productive, hitting .271 with five home runs, continuing to show impressive power. Toles has also become the team’s primary leadoff hitter, cementing his importance to the Dodgers.

“It’s pretty frustrating. I got off to a good start, but it’s part of sports,” said Toles. “Got to move on. I want to stay positive. I was swinging good, playing good defense, but it pretty much just came to a halt. No sense in being distraught. It’s not the end of the world. We got other dudes that can play, so it’s no big deal.”

The injury is all the more devastating when you consider that Toles was out of baseball in 2015 after being released by the Tampa Bay Rays. For a while, he was working at a grocery store before the Dodgers offered him a minor league contract. Toles began the 2016 season in A-ball but by July was called up to the big leagues. He’s impressed the Dodgers ever since, even hitting .364 in the postseason last year.

“His outlook on things is that he’s not too down,” said Dodgers manager Dave Roberts. “He’s not too down. I think where most people would be devastated, his outlook on life is pretty simple, which is great. Just with his trek to get to the big leagues and what he’s had to endure and overcome, and to establish himself as a big league ballplayer for a winning team, says a lot about his character. To not see it through this year, I know his teammates, coaches, we’re all disappointed.”

Roberts says that with Toles going down, Cody Bellinger will return to playing left field. Bellinger was playing left field when he was first called up last month but was moved to his natural position at first base when Adrian Gonzalez went to the DL. In his first 14 big league games, Bellinger is hitting .306 with six home runs, so production out of left field shouldn’t be an issue. However, moving Bellinger back to left field puts him in a less familiar spot defensively and creates holes elsewhere.

Until Gonzalez returns to first base, Chase Utley and Scott Van Slyke figure to split time there, although neither has been productive offensively this year. Utley is also helping to fill in at second base while Logan Forsythe is on the DL with a broken toe. Forsythe figures to replace Toles in the leadoff spot when he returns, but until then, it appears Joc Pederson will be forced into the leadoff spot. Forsythe appears to be at least a week away from returning.

Obviously, the Dodgers have a plan to replace Toles in the lineup, and they have become well accustomed to replacing injured players over the past couple of seasons. However, Toles leaves big shoes to fill. His recent hot streak has coincided with the team winning nine of its last 11 games, including five in a row. In addition to forcing a lot of moving pieces, the injury to Toles deprives the Dodgers of a player who had become an important piece of the puzzle.