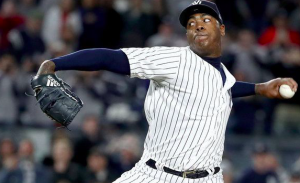 The New York Yankees have placed closer Aroldis Chapman on the 10-day DL with inflammation in his left rotator cuff. The news comes on the heels of a pair of rough outings over the past week in which Chapman failed to complete a full inning. Chapman underwent an MRI on Saturday that didn’t reveal any structural damage in his shoulder but showed enough inflammation for the Yankees to place him on the DL and shut him down for the time being.

“He’s going to be shut down for two weeks and then we’ll re-assess,” Yankees GM Brian Cashman said Sunday. “You’re probably looking at a minimum of a month if everything goes right.”

Chapman began the season as dominant as ever after re-signing with the Yankees over the winter, shortly after winning a World Series with the Cubs, who acquired him in a trade with the Yankees last summer. Through his first 12 outings of the season, Chapman was 7 for 7 in save situations and had an ERA of 0.79.

However, last Sunday, Chapman blew a save against the Cubs, allowing three runs in less than an inning of work. The southpaw didn’t pitch again until Friday when he again failed to finish the inning he started. During that outing, Chapman struggled with his control, walking two batters. At one point, Chapman shook his arm and had to be checked out by the team’s trainer, but he was allowed to stay in the game.

“I saw that too,” Yankees manager Joe Girardi said Friday when asked about Chapman shaking his arm. “He said he was fine. No pain, nothing. I don’t know if it is a colder night, windy, I am not really sure. That was my concern.”

Chapman has not spoken to the press since Friday’s outing, but reports indicate that he told the Yankees that he had a similar issue with his rotator cuff while pitching for the Cincinnati Reds during the 2012 season. Chapman did not spend any time on the DL that season but did miss more than a month of action with shoulder inflamation the previous year.

Despite Chapman’s MRI coming back clean, the Yankees have to be concerned about a problem with his shoulder. New York’s bullpen has been one of the best in the American League this season, and the last week aside, Chapman has been a big reason why. Not having Chapman for at least a month, possibly longer, will undoubteldy change the complexion of the team’s bullpen.

The good news for the Yankees is that the success of thier bullpen this season has been about more than just Chapman. Dellin Betances has allowed just one run on five hits over 11.2 innings this season. He’s more than capable of filling Chapman’s shoes as the closer, something he did the second half of last season after Chapman was traded. Tyler Clippard, Jonathan Holder, and Adam Warren have also had strong seasons, giving the Yankees plenty of bullpen depth. The experience of a veteran like Clippard should also come in handy, as he figures to take on a more prominent role.

Nevertheless, the loss of Chapman for at least a month is a significant blow to the Yankees. The Bronx Bombers ahve surprised many by jumping to the top of the AL East early in the season despite relying on a slew of young players. A strong bullpen led by Chapman has been a key part of that success, and the absence of Chapman should pose a stiff challenge for the Yankees to overcome in the weeks ahead.