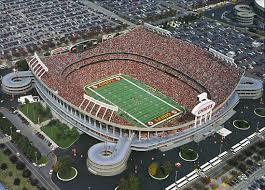 It’s the 5th largest NFL stadium in terms of seating capacity, and the 28th largest sports stadium in the United States. Its latest expansion and renovation was in 2010 at the cost of $375 million.

In a game against the Denver Broncos in 1990, the Chiefs became the first team to be warned under threat of a penalty that the stadium crowd needed to quiet down some. On October 13, 2013 the fans set the Guinness World Record for the loudest recorded crowd in history. After having that title taken by the Seattle Seahawks and a few other stadiums in the following months, Arrowhead reclaimed the record on September 29, 2014.

It was the first field to include arrows on the yard markers with the intent of identifying the nearest goaline. By the end of that decade, the rest of the NFL fields had adopted the same practice.

In the formation of Major League Soccer, Kansas City acquired the KC Wizards, who would play at the stadium only for the 1996 season before relocating to their own facility.

• After the AFL-NFL merger in 1966, the NFL began requiring stadiums to hold at least 35,000 fans, which Municipal Stadium did not. In their search for a new home, Jackson County entered with a location for the new stadium to be built on the eastern edge of Kansas City.

• The original stadium design included two parks, a baseball and football park back to back, which would share a retractable roof that could, in theory, alternate between the two. The design proved to be too much and the idea was later scrapped.

• In 1994 the team had the AstroTurf playing surface replaced by natural grass. Along with these field renovations, two Diamond Vision video screens were also added.

• Due to such high demand for tickets when Manchester United visited Kansas City on July 25, 2010 to take on the Wizards of the MLS league, the game had to be moved to Arrowhead Stadium, with the preseason friendly ending 2-1 in favor of the KC Wizards.

• It was the site of the annual Border Showdown Game from the years 2007 to 2011 between the Kansas Jayhawks and the Missouri Tigers. The largest attendance ever at the stadium was for the 2007 contest between these two teams, as it drew a crowd of 80,537.