Posted on August 4, 2016 by Bryan Zarpentine 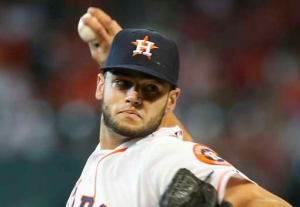 For the second time in as many days, the Houston Astros have added a pitcher to the DL. Tuesday the team placed key setup man Luke Gregerson on the DL, and they followed it up Wednesday by adding starting pitcher Lance McCullers to the 15-day DL. McCullers left his start Tuesday night against the Toronto Blue Jays after just 4.2 innings after complaining of elbow discomfort. On Wednesday, the Astros announced he was going to the DL with what the team is calling an elbow sprain.

The loss of McCullers stings for Houston, as he’s arguably been the team’s best starting pitcher this season. In 14 starts, McCullers is 6-5 with a 3.22 ERA, an identical ERA to the one he posted in 22 starts for the Astros last year. He’s also been at his best as of late, allowing no more than one run in five of his last six starts before Tuesday’s start, pitching at least five innings in each start.

Unfortunately for the Astros, McCullers is expected to miss for than 15 days, as manager A.J. Hinch said Wednesday he won’t do any kind of throwing for at least two weeks. “The diagnosis has been a sprain, and we’ll give him a couple of weeks to cool down,” Hinch explained. “He’s got some inflammation. The muscles around his elbow are pretty tight today because he’s trying to protect his body. That’s what happens when guys throw like they do. We’ll know more in the next couple of weeks, but what I can tell you is he’s not going to do any throwing for two weeks. We’ll re-evaluate him, and hopefully he’ll be feeling better and we can build him back him up.”

The injury is understandably frustrating for McCullers, who didn’t begin his season until the middle of May because of a sore shoulder. “I never want to be off the mound,” McCullers said. “I always want to be out there. I would pitch every day if I could. So it’s tough to deal with that from that standpoint, but all we can do is follow the doctor’s orders, and we have. That’s what we’re going to do.”

The team does not expect McCullers to need any kind of surgery to treat the injury. However, even if he’s cleared to start throwing in two weeks, he may need at least two more weeks to get his arm back in shape before he can return to the Astros, likely ruling him out until at least September.

Joe Musgrove will replace McCullers in Houston’s starting rotation. Musgrove has made one relief appearance for the Astros this year and is expected to make his first major league start Sunday against the Texas Rangers. He posted a 3.81 ERA in 10 starts at triple-A this season after dominating in six appearances in double-A earlier in the year.

After completing a series with the Toronto Blue Jays Thursday night, the Astros have a big three-game series this weekend against the Rangers, who they trail by 5.5 games in the AL West. Houston is also three games out of the second wild card spot. This is a critical point in Houston’s season, and an injury to McCullers that should keep him out for at least a month is not what the Astros needed right now, as it’ll make it that much harder for them to return to the postseason in 2016.