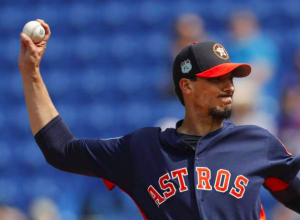 Just one day after getting Dallas Keuchel back from a recent trip to the DL, the Houston Astros have lost another starting pitcher to injury. The Astros placed Charlie Morton on the 10-day DL Sunday with a lat strain. Morton got through his most recent start on Wednesday without any issues but complained of soreness after the start and while throwing in between starts. The Astros don’t have a timetable for how long Morton will be out, but lat injuries have the potential to result in a rather lengthy absence.

“I didn’t really think it was that serious. It was just sore,” Morton told reporters on Sunday. “I threw a (bullepn session) two days ago, and it was fine. It’s sore. We all get sore. That’s why I was really surprised to find out it was more severe.”

The plan for Morton to refrain from throwing for at least a week, possibly longer. Then he’ll be re-evaluated. If he’s cleared to throw at the time, Morton could only end up missing a couple turns through the rotation, although it may be too soon to tell how quickly he’ll recover.

Morton is no stranger to injury, as he made just four starts with the Phillies last season because of a hamstring injury that ultimately required surgery. While pitching for the Pirates prior to that, Morton had his 2014 season end early and his 2015 season begin late because of hip surgery.

However, Morton had been enjoying a renaissance of sorts with the Astros this season after signing a two-year deal with Houston over the winter. There’s been a noticeable uptick in his fastball velocity as well as improvement in his curveball. In 10 starts this year, Morton is 5-3 with a 4.06 ERA. He’s also averaging better than a strikeout per inning.

Prior to the injury, Morton had clearly established himself as Houston’s third best starter behind Keuchel and Lance McCullers, making him a key part of the team’s success this year and an important part of the starting rotation. The Astros have also been without starter Collin McHugh all season after he experience elbow trouble during spring training. McHugh may still be a ways away from returning, and so if Morton also has an extended stint on the DL, Houston’s rotation depth could be tested in the weeks to come.

With Morton going on the DL, the Astros have recalled reliever Jordan Jankowski, who was just sent back to triple-A when Keuchel was activated from the DL on Saturday. The loss of Morton likely means a reprieve for Mike Fiers, who was moved to the bullpen when Keuchel was activated on Saturday. Brad Peacock originally moved from the bullpen to the rotation to fill in for Keuchel, but the Astros are choosing to keep him in the rotation for now, making Fiers the odd man out until Morton’s injury.

The Astros aren’t thrilled to be losing Morton after the way he’s performed through the first two months of the season. But they should be able to cope with his absence, even if he ends up missing several weeks. Houston currently has a league-high 34 wins and holds a nine-game lead in the AL West.

Between the return of Keuchel on Saturday, the continued emergence of McCullers, and the recent form of Peacock, not to mention a strong bullpen and high-powered offense, the Astros shouldn’t miss a beat. However, there should be some concern about the possibility of Morton missing a significant chunk of time, which can’t be ruled out at this time.