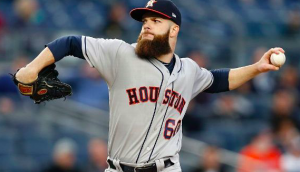 The best team in baseball has hit their first potential roadblock of the season. The Houston Astros placed ace Dallas Keuchel on the DL Saturday with a pinched nerve in his neck. The Astros are hopeful that he’ll be able to return from the DL as soon as he’s eligible and miss only one start. This is the first time Keuchel has been put on the DL during his big league career.

Keuchel says he woke up Wednesday morning, the day after his most recent start, with pain in his neck. On Thursday, he met with team doctors and underwent an MRI that revealed inflammation in his neck. The Astros have since decided to play it safe and place Keuchel on the DL so the issue can subside without Keuchel having to pitch through pain.

“There’s been some discomfort, so with the position we’re in now – I don’t like to miss any time – but this is probably the best-case scenario, to be a little bit more precautionary than usual,” Keuchel explained to reporters. “I think if I had to I could probably go out there and pitch. But like I said, with the position we’re in right now, this is kind of the best way to go about it right now.”

The position the Astros are currently in is having a major-league high 29 wins and a commanding lead atop the AL West less than two months into the season. Even with the Texas Rangers winning 10 games in a row and counting, Houston still has a 6.5 game lead atop the division. Given that lead and Keuchel’s importance to the team, the Astros have no intention of bringing Keuchel back to the rotation before he’s ready.

“We hope that this can knock out any sort of lingering soreness,” Astros manager A.J. Hinch said Saturday. “I’m not a doctor. I don’t know what has to happen between now and then other than the diagnosis is a pinched nerve and we need to calm it down a little bit before he can resume his activity.”

Long man Brad Peacock will come out of the bullpen and take Keuchel’s next scheduled start on Monday. Peacock has been a starter in the past but has posted a 1.10 ERA in 12 relief appearances this season. The Astros have called up lefty Ashur Tolliver to take Peacock’s spot in the bullpen.

Keuchel has been one of the best pitchers in baseball and invaluable to Houston’s success early in the year. Through his first nine starts of the season, Keuchel is 7-0 with a 1.84 ERA, so any kind of injury should be a cause for concern. After a disappointing 2016 season, Keuchel has bounced back nicely and is pitching even better than he did two years ago when he won the Cy Young.

“It’s never good when you lose one of your best players or your best pitchers, and he’s got to take a step back,” said Hinch. “We feel like we have everything under control — and we’re going to do what’s best for him and best for our team and put him on the DL. It’s unfortunate. Every team has to deal with something like this at some point in their season, sometimes more than once with different players. It’s the nature of the business.”

But if there’s one team in baseball that’s capable of surviving without its ace for a period of time, it’s probably the Astros. Houston’s bullpen has been one of the best in the American League this year, and the Astros also happen to have one of the most potent lineups in baseball, both of which can help to compensate for the loss of an ace like Keuchel.

Aside from losing Collin McHugh during spring training, the Astros haven’t faced much adversity this season, so it’s not as if issues are piling up for them. Having to place Keuchel isn’t ideal, but the team doesn’t believe the issue is anything serious, and their place in the standings makes it easy for the Astros to play it safe. If Keuchel misses one, or even two starts, the Astros should be able to carry on without missing a beat.