Astros Rookie Alex Bregman Out for the Season

Posted on September 17, 2016 by Bryan Zarpentine 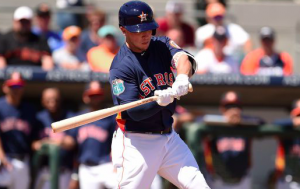 The 2016 season is likely over for Houston Astros rookie Alex Bregman, who suffered a hamstring injury on Wednesday. Houston manager A.J. Hinch says Bregman has been diagnosed with a hamstring strain, which he suffered running the bases on Wednesday. Hinch says it’s the type of injury that would usually warrant a trip to the 15-day DL, although there is no need to do so with rosters expanded in September. With little more than 15 days left in the regular season, Bregman’s season is likely over.

“The diagnosis for [Bregman] is a little disheartening,” Hinch said. “He’s got a hamstring injury that would normally require a DL stint right away, which means that we think it’s at least 15 days, if not more. Where we’re at on the schedule, that obviously is not a good sign. So, he’ll be back in Houston and beginning the therapy needed and the treatment needed. He won’t be with us.”

The Astros have called up prospect Colin Moran to provide a little more infield depth, a sign that the team doesn’t expect to get Bregman back. If this is it for Bregman, he will finish his rookie season with a slash line of .260/.311/.480. He was called up in late July, a little over a year after being selected by the Astros in the first round of the 2015 MLB Draft. Bregman had just two hits in his first 38 at bats before catching fire in August, potentially setting him up for a breakout season in 2017.

Still, Hinch laments the loss of Bregman for the final two weeks of the season. “It’s a loss for us on a lot of fronts,” Hinch said. “He’s a really good player and he was hitting in the two-hole. He was in the middle of a lot of things that were going right for us. So it’s definitely a blow for us.”

Bregman is a shortstop by trade but has been used primarily at third base since coming to the big leagues, as the Astros have Carlos Correa entrenched at shortstop. With Bregman now out of the lineup for the rest of the season, Yulieski Gurriel, who Houston signed out of Cuba earlier this summer, should see a majority of the time at third base. Gurriel is a natural third baseman, but like Bregman, got most of his at bats elsewhere upon coming to the majors.

If there’s a silver lining for the Astros, it’s that second baseman Jose Altuve, who like Bregman, left Wednesday’s game with an injury, was able to return to the lineup Friday night. Altuve didn’t travel with the team to Seattle initially, but made it there before the start of the game and went 2 for 5 in Houston’s 6-0 win over the Mariners.

The Astros are currently four games out of the second wild card spot in the American League, meaning nearly every game they play is a must-win game for them. The absence of Bregman the rest of the season will certainly hurt Houston’s already slim playoff chances. The good news is that 10 of Houston’s final 15 games come against either the Oakland Athletics or Los Angeles Angels, two teams merely playing out the season, giving the Astros a glimmer of hope to return to the postseason.