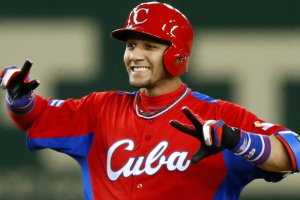 The Houston Astros have reportedly agreed to sign Cuban free agent Yulieski Gourriel. The team has scheduled a press conference for Saturday afternoon to formally announce the deal, which is reportedly a five-year contract worth $47.5 million. Major League Baseball declared Gourriel a free agent last month after he and his younger brother, Lourdes Gourriel Jr., defected from Cuba in February.

“Until things are official I’m not going to comment on it,” Houston manager A.J. Hitch said Friday. “I will say that we worked him out, we had interest in him. We’ve been all over the background check and things like that. We’ll have to wait for the official announcement.” In addition to the Astros, Gourriel also had private workouts with the Mets, Yankees, Dodgers, Padres, and Giants.

Gourriel, 32, is one of the most celebrated Cuban players in recent history. He helped Cuba win the 2004 Olympic Gold Medal. He also represented Cuba in the 2008 Olympics, as well as the World Baseball Classic in 2006 and 2009. He is projected to play either third base or second base in the majors.

If reports are true, a five-year deal is far more than most were expecting Gourriel to receive. Due to his age, most were expecting him to receive offers for two years, possibly three years, worth roughly $8 – $10 million per season. Gourriel is expected to need 50 to 60 at bats in the minors before being ready to play in the majors, so he may not make his big league debut until August.

It was once thought that Gourriel and his brother would try to sign with the same team as a package deal. However, Lourdes has not yet been declared a free agent. He is also likely to wait until at least October, when he will turn 23, to sign with a team. Once he turns 23, teams will no longer have to use money from their international signing pool, allowing him to sign for a larger amount. Whether the Astros are interested in also signing the younger Gourriel brother remains to be seen.

In addition to the surprise of signing him to a five-year deal, many did not see the Astros as an obvious fit for Gourriel. In the immediate future, he would appear to play third base in Houston, likely shifting Luis Valbuena back to first base. Valbuena is hitting .265 with 12 home runs this season while playing primarily at third base. Meanwhile, the Astros have struggled to find much offense or a permanent solution at first base. Inserting Gourriel at third base and moving Valbuena to first base would appear to solve that problem for a team that caught fire late in the first half of the season and is now just 4.5 games out of first place in the AL West and one game out of the second wild card spot.

However, Gourriel’s long-term fit in Houston is a question mark. The second overall pick in last year’s draft, Alex Bregman, is expected to be ready for the big leagues early in 2017, if not sooner, after recently being promoted to triple-A. At that point, either Bregman or Carlos Correa will be shifted to third base, where Gourriel would presumably be playing. Gourriel could shift to second base, but not in Houston where Jose Altuve has the position locked down. What exactly Houston’s long-term plans are for Gourriel remain unclear. Of course, there’s every chance he’ll be able to provide a significant boost to Houston’s playoff chances late in 2016.