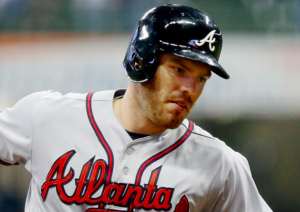 One day after seeing their best player forced to leave a game, the Atlanta Braves had their worst fears confirmed. The club placed first baseman Freddie Freeman on the 10-day DL Thursday because of a broken wrist. The Braves expect Freeman to be out 10 weeks, likely keeping him sidelined until August, a crushing blow to a young team that had hoped to remain competitive deep into the season.

Freeman suffered the injury Wednesday night when he was struck by a pitch from Toronto lefty Aaron Loup. X-rays taken following the game were inconclusive, forcing Freeman to undergo an MRI and CT scan on Thursday that confirmed that his wrist was indeed broken.

Freeman has anchored Atlanta’s lineup for several years, and this season has been no exception. Through 37 games this year, Freeman is hitting .341 with 14 home runs and 11 doubles, helping him compile an OPS of 1.209. Those numbers put him in a tie with Aaron Judge for the most home runs in the majors and behind only Bryce Harper in OPS. Even by his standards, Freeman is in the middle of a career year, a season that sadly must be put on hold.

There’s no way that any team could replace a player like Freeman, particularly the Braves, who rank in the bottom half of the National League in most offensive categories despite Freeman’s super-human performance this year. Atlanta is also lacking in players capable of playing first base while Freeman is out. Jace Peterson replaced Freeman on Wednesday night, but he has little experience at first base.

Within an hour of announcing that Freeman would be on the shelf for 10 weeks, the Braves reportedly reached an agreement with free agent first baseman James Loney, giving the Braves a bonafide first baseman. Loney was released from a minor-league deal with the Tigers earlier this month after hitting .229 in his first 48 at-bats. However, Loney hit a solid .265 with an OPS of .703 in 100 games for the Mets last season when they were in a similar situation with first baseman Lucas Duda on the DL for an extended period of time.

Loney is obviously a massive step down from Freeman, but that would be the case for anybody Atlanta could use to fill the void at first base for the next 10 weeks. If nothing else, Loney gives the Braves a veteran major leaguer on their roster, as well as a strong defensive first baseman. It’s too early in the season for the Braves to explore a trade for a first baseman, and the team isn’t in a position to give up any of their top prospects for an upgrade, and so Loney is the best first baseman they can hope for at this point.

At this point in the season, the Braves are five games under .500 and five games out of a playoff spot, and that’s with Freeman having an MVP-caliber season. With Freeman absent for the next 10 weeks, any hope of the Braves competing for a playoff spot this year is all but lost. Freeman is one of the most impactful players in baseball, and unfortunately, Atlanta’s chances of surviving an extended period of time without him are slim to nil.