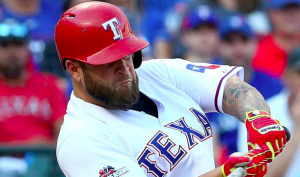 A nagging back injury has sent Texas Rangers first baseman Mike Napoli to the DL. The Rangers placed Napoli on the 10-day DL, retroactive to Sunday. Napoli hasn’t played since Saturday when back trouble forced him to leave in the 5th inning of the team’s game against the Astros. However, Napoli has been bothered by the lower back strain since a series in Boston last month.

“We had gone through the rehab process and got to a point where we weren’t making as much progress as we thought we should,” Rangers manager Jeff Banister said of the decision to put Napoli on the DL.

Even before being hindered by back trouble, Napoli was having a rather disappointing season in his third stint with the Rangers. Through the first two months of the season, Napoli is hitting just .192 with an OPS of .669. Despite the low average, Napoli has provided the Rangers with plenty of power. He’s hit 11 home runs this year, continuing a power resurgence that began with his 34 home runs with the Indians last season.

Regardless of his performance, the loss of Napoli to the DL is another setback for the Rangers. Aside from a 10-game win streak last month, Texas has struggled to find consistency this season. The Rangers began Tuesday five games under .500 and 15 games behind the Astros in the AL West. After winning back-to-back division titles the past two years, this season has been a profound let down for the Rangers.

Of course, injuries have played an important role in the team’s struggles. Napoli joins center fielder Carlos Gomez and ace Cole Hamels as key players on the DL. Moreover, the Rangers only recently got third baseman Adrian Beltre back from the DL for the first time this season. With Gomez not expected back until later this month and Napoli out for the foreseeable future, the Rangers will have to wait a little longer until they can get their ideal lineup on the field.

The silver lining to Napoli’s injury is that the Rangers don’t have to think too hard about how to replace him. Joey Gallo will continue to deputize at first base for as long as Napoli is on the DL. Gallo was the team’s primary third baseman while Beltre was on the DL and he’ll likely play the same role at first base with Napoli on the shelf.

Gallo has essentially been a left-hand hitting version of Napoli this season. His average is barely above .200 but he’s provided massive amounts of power. In 55 games, Gallo has hit 16 home runs, helping to produce an OPS of .827.

The injury to Napoli actually allows the Rangers to keep Gallo in the lineup every day without having to reshuffle the outfield. But if the Rangers are going to get things turned around and jump back into contention, they’re going to need all hands on deck. Despite a poor record, a wild-card spot remains a possibility if the Rangers can get hot again like they did during their 10-game win streak last month. But the loss of Napoli to the DL is just another setback for Texas and another injury for the team to overcome.