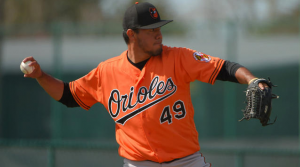 The race atop the AL East is as tight as can be, with the Baltimore Orioles, Boston Red Sox, and Toronto Blue Jays starting Saturday all within one game of one another. On Saturday, the Orioles welcomed back two players from the DL they hope will be able to help them remain in first place for the rest of the season. Both Yovani Gallardo and J.J. Hardy were activated from the DL Saturday, and both were in the lineup, helping the Orioles defeat the Blue Jays.

Before Saturday, Gallardo had not pitched since April 22 because of tendinitis in his biceps. Before the injury, he struggled in his first four starts of the season, a disappointing beginning to his tenure in Baltimore after the Orioles acquired him this winter to help lead their rotation. Fortunately for the Orioles, Gallardo’s return from the DL on Saturday was one of his best starts of the season, lasting five innings and allowing just two runs on five hits, although he did walk four. Against such a powerful and potent Blue Jays lineup, such a performance was quite promising for Gallardo, who must pitch like a front-of-the-rotation starter if the Orioles are going to remain in first place.

As for Hardy, the Orioles were without him since May 1 because of a broken foot. Hardy was off to a solid start in April, hitting .244 with two home runs and seven doubles before the injury. Those numbers aren’t outstanding by any stretch, but they are an improvement from what he did for the Orioles the previous two seasons. Hardy stepped right back into the lineup at shortstop on Saturday, where he’s likely to stay for the foreseeable future. His presence will allow the Orioles to move Manny Machado back to third base and relegate Ryan Flaherty to a bench role, as Flaherty continues to struggle offensively.

The presence of Gallardo and Hardy helped the Orioles defeat the Blue Jays on Saturday, ensuring Baltimore stays in first place at least another day. Admittedly, Hardy isn’t an impact player, but he should provide a noticeable upgrade over Flaherty, and in a race this tight, no advantage, no matter how slight, should be dismissed.

Meanwhile, Gallardo immediately becomes one of the biggest x-factors in the AL East. The Orioles have climbed to first place with very little contributions from one of their most talented starting pitchers. If Gallardo is able to stay healthy and put his early-season struggles behind him, he can pair with Chris Tillman atop Baltimore’s rotation and give the Orioles and 1-2 punch that could help carry them to a division title. If everything goes as the Orioles hope, the return of Gallardo and Hardy from the DL on Saturday could turn into a key moment in their 2016 season.