Bartolo Colon In Danger of Losing Rotation Spot with Braves 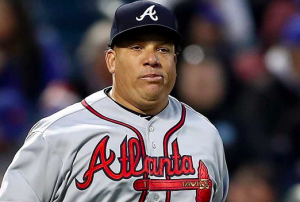 Father Time may finally be catching up to Bartolo Colon. When they signed him this winter, the Atlanta Braves thought they’d be getting a veteran to help solidify their rotation. But things have not worked out according to plan thus far. Now the Braves are reportedly evaluating the 44-year old’s place in the starting rotation.

Through 12 starts, Colon is 2-7 with a 7.78 ERA, and things don’t appear to be getting better. Monday against the last place Phillies, Colon lasted just 3.2 innings, allowing seven runs. In his previous start against the Angels, Colon lasted just 2.1 innings, although only two of the nine runs he gave up were earned. With Colon’s season continuing to go downhill, Braves manager Brian Snitker said after Monday’s game there’s no guarantee Colon will make his next start.

“We’re going to think about it going forward,” Snitker said of Colon. “I haven’t made a decision yet about the next one. We’ll just see.”

The Braves are paying Colon $12.5 million this year, which won’t make it easy to yank him from the rotation during the first half of the season. Atlanta is also in the middle of playing 14 games in 13 days. Such a demanding schedule will make it difficult for the Braves to rearrange their rotation.

“We’re getting ready to play a lot of baseball this week,” Snitker said. “We’ve got to factor in all of those variables in determining how to get through the next nine days”

Colon is obviously disappointed in his performance this season. But he believes he’s merely in a slump that he’ll break out of at some point.

“Physically and mentally, I still feel good,” Colon said through an interpreter after Monday’s outing. “Right now, I’m just on a bad streak really. I’ll just try to work my way out of it. God willing, I can.”

To be fair, most of Atlanta’s rotation has struggled this year. Both R.A. Dickey and presumed ace Julio Teheran have an ERA over 5, as they’ve struggled to adapt to the team’s new hitter-friendly ballpark. But Colon has been far worse, and so a move to the bullpen may be coming soon, even amidst Atlanta’s busy schedule.

“Whatever decision they make, I’ll accept it and follow through with it,” Colon said about a possible move to the bullpen.

If the Braves choose to remove Colon from the rotation, they’ll have plenty of replacement options. Both Matt Wisler and Aaron Blair have major league experience  and are viable options despite posting modest numbers at triple-A this year. Prospects Lucas Sims and Sean Newcomb are also intriguing possibilities. Sims may be more likely to get a chance, as he’s already on the 40-man roster. However, Newcomb is one of Atlanta’s top pitching prospects and has posted a 2.97 ERA in 11 starts at triple-A.

The Braves originally signed Colon so they wouldn’t have to rush their young pitchers to the big leagues before they’re ready. But at this point, Atlanta’s young starters may be the better option in both the short-term and long-term interest of the club. Colon’s struggles may be a sign that it’s time for the Braves to start transitioning to their younger pitchers.

The Braves are not yet out of contention for a playoff spot, but they need to start making a move to get back above .500. Right now, Colon’s struggles are preventing them from putting together an extended win streak that can help make that happen. With several promising young starters available in triple-A, now may be the right time to remove Colon from the starting rotation.