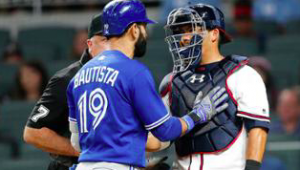 Things got heated Wednesday night between the Atlanta Braves and Toronto Blue Jays, as the benches cleared on two separate occasions within the span of two innings. No punches were thrown and nothing got out of hand, but there was definite tension between the two teams, who will play the final game of a four-game home-and-home series Thursday night with the Braves attempting to complete the sweep.

The opening act came in the 7th inning when Braves pitcher Jason Motte struck out Toronto center fielder Kevin Pillar to end the inning. Motte used a quick pitch to catch Pillar by surprise, causing him to wave at a pitch out of the strike zone. Pillar took exception to the perfectly legal maneuver and yelled something at Motte as he walked off the mound.

There’s been speculation that Pillar may have yelled a homophobic slur at Motte, although no one on the field has confirmed what was said. Regardless, Pillar yelled something that caused Braves catcher Kurt Suzuki and home plate umpire Brian O’Nora to step in front of Pillar right away. Meanwhile, both benches cleared for the first time.

After the game, Pillar didn’t go into detail about what he said. However, he appeared contrite, as if he knew he had crossed a line.

“Obviously, that was the initial thing I was upset about, but I think it just stems from a little frustration in myself and just the way this series has been going,” Pillar said after the game. “It was immature, it was stupid, it was uncalled for. It’s part of the game, it’s just, I’m a competitive guy and heat of the moment. Obviously, I’m going to do whatever I’ve got to do to reach out and apologize and let him know he didn’t do anything wrong, it was all me.”

Just an inning later, with the Braves holding a five-run lead, Jose Bautista flipped his bat in the air after hitting a home run against Atlanta reliever Eric O’Flaherty. Bautista also attempted to stare down O’Flaherty, who was busy watching the ball fly over the left field wall.

The Braves did not take kindly to Bautista’s bat flip. Jace Peterson said something to Bautista as he rounded first base during his home run trot. Suzuki then had words for Bautista when he got back to home plate, forcing O’Nara to intervene and causing both benches to clear for the second time. Again, no punches were thrown and eventually cooler heads prevailed, at least until the players spoke after the game.

“That’s something making the game tough to watch,” O’Flaherty said of Bautista’s home run celebrations. “It’s turned into look-at-me stuff. He hit a home run with (the Braves holding) a five-run lead and throws the bat around. I’m just tired of it. I’ve seen it from him enough.”

Of course, this was not Bautista’s first bat flip. A bat flip during the postseason in 2015 angered the Texas Rangers, with tensions ultimately boiling over last season when Bautista took a punch from Rangers second baseman Rougned Odor, an event all of baseball, including O’Flaherty, remembers.

Blue Jays manager John Gibbons brushed off the incident as nothing Bautista hasn’t done before. Bautista is also hoping to quickly move on, not seeing it as a big deal.

“I understand why (the Braves) would be upset in that situation, and I just told them how I felt,” Bautista explained. “Basically just let them know that I wasn’t trying to show up anybody and hopefully it’s in the past. It has nothing to do with [frustration], but it was definitely not something that was fitting for the moment. Sometimes our competitive juices come out in the wrong moment. We have to deal with it between the lines like men — I feel like I did that and hopefully, that’s enough.”

However, the Braves may not be so quick to forget. Despite winning the first three games of the series, the Braves don’t appear to be happy about some things that have happened over the last three days. Aside from Pillar’s outburst and Bautista’s bat flip, the team’s twitter account mentioned Wednesday night that seven Braves have been hit by the pitch since the series began. That list includes the team’s best player, Freddie Freeman, who may have a broken wrist after being hit.

All of this sets the stage for a tension-filled series finale Thursday night. The Braves have reason to be frustrated at Wednesday’s events and the hit batters, while the Blue Jays have to be frustrated by three straight losses. It wouldn’t be a surprise to see both teams a little on edge when they meet again on Thursday night.