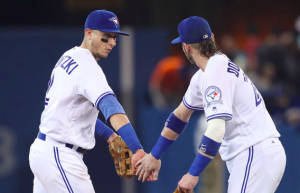 The Toronto Blue Jays have done their best to steady the ship following a disastrous start to the season brought about in large part because of injuries. Now, nearly two months into the season and with a substantial deficit to make up in the AL East, the Blue Jays are finally starting to get healthy again. It started Friday with the return of the entire left side of their infield, Josh Donaldson and Troy Tulowitzki.

“I feel good because we’ve been waiting on this day,” Blue Jays manager John Gibbons said Friday. “It’s kind of nice that they’re both back together. These are two key parts in how this team was put together. And I feel good about what the other guys did, holding down the fort. We’re still, naturally, not where we wanted to be anyway but I think we very easily could have disappeared but those other guys played so good.”

Donaldson played in just nine games before going on the DL on April 14 with a calf injury that first became an issue for him during spring training. Prior to the injury, Donaldson was off to a fast start, hitting .310 with an OPS of 1.015. Darwin Barney became Toronto’s primary third baseman while Donaldson was on the DL, but there’s obviously a huge drop-off between the two players, particularly in the power department.

Tulowitzki wasn’t out quite as long as Donaldson with a hamstring issue, but he did spend more than a month on the DL. The Blue Jays shortstop got off to a sluggish start to the season, but it’s likely that he would have heated up at some point had he stayed healthy. The Blue Jays were forced to get by with Ryan Goins at shortstop while Tulowitzki was sidelined. Goins is hitting just .212 on the season, so he is obviously a huge step down from the five-time all-star.

Nevertheless, the Blue Jays are satisfied with the way that their ancillary players were able to fill in for Donaldson and Tulowitzki in recent weeks.

“That’s what makes a team strong, is when core guys go down you have guys that can step in and hold the fort down until the guys come back and that’s exactly what they did,” Tulowitzki said. “In the long run, that’s going to make us a better team.”

The Blue Jays haven’t lost much ground in the standings over the past month with both Donaldson and Tulowitzki on the DL. However, they’ve not been able to catch up to the other teams in the AL East, shortening how much time they have to make up for their rough start. With Donaldson and Tulowitzki back, now may be the time for the Blue Jays to make a move up the standings.

“They’re two huge parts of our team,” said Gibbons. “We feel good. We survived their absence anyway. We didn’t totally disappear, so we’ll see. At least our lineup looks like it was supposed to look. We’ll see if we can do anything with it.”

Donaldson and Tulowitzki have rejoined a lineup that on paper looks like it could be one of the best in baseball if everyone is healthy and clicking on all cylinders. In addition to the two returning players, Jose Bautista has shaken off a dreadful April and been swinging a hot bat throughout May, helping to give Donaldson and Tulowitzki some protection in the lineup. In addition to that trio, Kevin Pillar is having a career year offensively, Devon Travis has been red-hot in May, and both Kendrys Morales and Justin Smoak are providing the Blue Jays with plenty of power, giving Toronto a deep lineup like the one that has carried them to the ALCS the past two seasons.

Unfortunately for the Blue Jays, they still have three starting pitchers on the DL in J.A. Happ, Aaron Sanchez, and Francisco Liriano. Those absences have put even more pressure on Toronto’s lineup to carry the team, even though the kind of deficit the Blue Jays face in the AL East requires the entire team playing a role in a comeback. However, with Donaldson and Tulowitzki back from injury, the Blue Jays may have the kind of lineup that can give them a fighting chance to get back in the race.