Posted on August 5, 2016 by Bryan Zarpentine 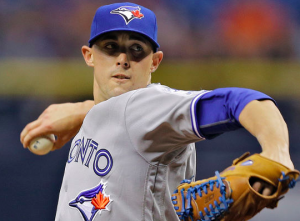 The Toronto Blue Jays have had a change of heart with regard to pitcher Aaron Sanchez. The team previously announced plans to transition Sanchez to the bullpen to curb his innings, but Thursday GM Ross Atkins told reporters that the team had changed its mind and that Sanchez would continue to be a starter, although he will now be part of a six-man rotation.

After the Blue Jays acquired starter Francisco Liriano from the Pittsburgh Pirates right before the non-waiver trade deadline, it appeared as if Sanchez would finally be moved to the bullpen. Sanchez threw a little over 100 innings last season between his time with the Blue Jays and a few appearances in the minors. Teams generally try to limit young pitchers to a 30-inning increase from the previous year, and with Sanchez already at 139.1 innings this season, a move to the bullpen seems inevitable to prevent him from making a drastic leap in his innings count. But now it appears the Blue Jays are going in another direction.

“The biggest thing is input from different people after something was more concrete, or closer to it, and the fact that Francisco Liriano was so open to everything,” Atkins said. “Then the more we thought about the potential of a six- man rotation not just benefiting Aaron but benefiting the others in the rotation at this point in the season.”

Atkins reportedly spoke with manager John Gibbons, members of the coaching staff, and several players earlier in the week before deciding to change course. “Aaron sees himself as a Major League starting pitcher,” Atkins said. “I think ultimately what he’s focused on is helping the team win, but he sees himself as a starting pitcher, and he has worked really hard to put himself in that situation. He has been great about it. He has been focused on the team. He has been putting the team first since Day 1, but I think it’s his preference to remain in the rotation.”

It should be noted that Sanchez did throw 133.1 innings between the majors and minors in 2014, but he’s already set a career high for innings with two months left in the season, and he would far exceed his innings total from 2014 if he remains in the starting rotation the rest of the season. “That’s the question, that’s what we’re focused on, and what we’re trying not to do is paint ourselves into a corner,” Atkins said about managing Sanchez’s innings. “We’re also thinking about all of the alternatives. It’s amazing how many ideas have come out of this, and they have come from so many different places.”

For now, both Sanchez and Liriano will be part of Toronto’s six-man rotation, as Atkins says he’s satisfied with the current set up, as well as the number of options the team has to make a change later in the season if necessary. Of course, it’d be hard for Toronto to change course now with everything going so well for them. The Blue Jays are currently tied with the Baltimore Orioles for both the AL East division lead and the top wild card spot, and with an 11-1 record and 2.71 ERA, Sanchez has been a huge part of that success as a member of the starting rotation.