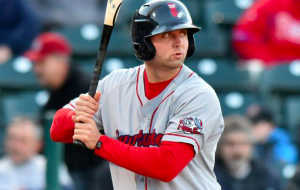 The middling Boston Red Sox are looking for a boost, and they’re hoping it comes from their farm system. The Red Sox have called up first base prospect Sam Travis, who will be on the bench when Boston begins a home series against the Texas Rangers Tuesday night. Travis could make his first big league start as early as Wednesday.

Travis is ranked as Boston’s third best prospect, according to MLB.com, which also rates him as one of the top 10 first base prospects in all of baseball. The Red Sox drafted Travis in the 2nd round of the 2014 draft out of Indiana University. He moved quickly through the minors and began the 2016 season at triple-A, hitting .272 with an OPS of .765. and a league-high 29 RBIs until tearing his ACL, an injury that ended his season.

If not for the injury, Travis may have been in a position to start the 2017 season as Boston’s primary first baseman. However, with some uncertainty coming off the injury and the Red Sox wanting Travis to get more seasoning in the minors, the team signed Mitch Moreland over the winter to be their first baseman, moving Hanley Ramirez to the DH spot in place of the now retired David Ortiz.

Moreland got off to a sensational start this season but has started to struggle over the past couple of weeks, perhaps a side effect of having to play nearly every game this season with no viable backup at first base. Ramirez was in line to see at least some time at first base after he started 133 games there for the Red Sox last year. However, Ramirez is unenthusiastic about playing in the field and has struggled with a shoulder issue since spring training, making it difficult to put him in the field, leaving Moreland without a backup.

Travis will finally provide the Red Sox with a viable backup for Moreland at first base. Moreland is likely to get a lion’s share of the playing time at first base, but with Travis being a right-handed hitter, he could end up in a straight platoon with Moreland at first base, assuming Travis is able to produce offensively in his first trip to the big leagues. The left-hand hitting Moreland has held his own against southpaws this season but has struggled to produce much power against them, opening the door for a platoon with Travis.

After struggling a little out of the gate at triple-A, Travis has started to heat up lately. During the month of May, Travis is hitting .333 with a .949 OPS. He’s also hitting .414 with an OPS of 1.209 against lefties this year, making the Red Sox hopeful that he can be productive against left-handed pitching in the majors.

It remains to be seen if Travis is in the big leagues to stay or the Red Sox just want to get Moreland a couple days off. But if he can produce and turns into a good platoon partner for Moreland, it may be difficult to send him back to the minors. Heading into Tuesday’s game, the Red Sox are just a game over .500 and struggling to make up ground on the Yankees and Orioles, and so anything that has a chance to provide a spark is worth trying. Right now, that means bringing up Travis.

Many view Travis as Boston’s first baseman of the future, and while he’s unlikely to push Moreland out and take over the job full time, he does have a chance to carve out a part-time role for the rest of the season. There’s no guarantee he’ll end up staying long, as he could be better off playing every day in triple-A rather than playing in a platoon in the majors. But if he can help the Red Sox win games, Travis has an opportunity to remain in the big leagues permanently.