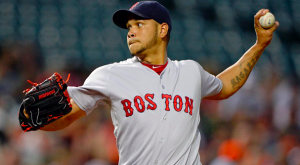 The Boston Red Sox just can’t seem to keep their starting rotation healthy. Less than a week after David Price finally made his season debut, the Red Sox have lost fellow lefty Eduardo Rodriguez to a knee injury. The Red Sox placed Rodriguez on the 10-day DL on Friday. Rodriguez slipped while throwing in the bullpen before his start on Thursday, and one day later he’s heading to the DL and giving the Red Sox another void in their starting rotation to fill.

“I don’t know if I can tell you (what happened),” Rodriguez said of his slip on Thursday. “I just threw a pitch and my foot got in a bad position and I went down. But nothing crazy. I just landed a bit different, and that’s it.”

Despite the pre-game slip, Rodriguez still made his regularly scheduled start against the Orioles. However, it turned out to be his worst start of the season by far. Rodriguez was lit up for seven runs on eight hits over 5.2 innings, giving up four home runs. Of course, the Orioles are known for their power, so giving up four home runs against Baltimore is not unprecedented.

Red Sox manager John Farrell says he checked with Rodriguez between every inning on Thursday and the lefty reported no issues with his knee. Neither the manager or Rodriguez used the slip as an excuse for the poor performance.

“Those guys when you miss, that’s what happens,” Rodriguez said of Baltimore’s lineup. “They were making good contact and hitting homers. I just missed my pitches. Too much in the strike zone.”

Nevertheless, Rodriguez felt enough discomfort in his knee on Friday for the Red Sox to put him on the DL. Unfortunately for Boston, Rodriguez is no stranger to knee injuries. After his first start of the 2016 season, Rodriguez was placed on the DL with a dislocated knee cap. That injury was in his right knee, the same knee he hurt when he slipped on Thursday. Rodriguez also had a minor knee injury while pitching in winter ball during the offseason.

At this time, the Red Sox don’t have a timeline for how long Rodriguez will be out. The club says he has an “anatomical peculiarity” in his knee, making him more prone to injuries. Rodriguez will seek a second opinion on his knee on Monday. At that point, the Red Sox should have a better idea how much time he’ll miss.

Prior to his rough outing on Thursday, Rodriguez had an ERA of 2.77. He was in the midst of a true breakout season after finally solidifying a spot in Boston’s rotation the second half of last season. Outside of Chris Sale, the 24-year old has been Boston’s best starting pitcher this year. Of course, with Price missing time, Steven Wright undergoing season-ending surgery, and Rick Porcello getting off to a rough start, Boston’s rotation has not lived up to expectations this year.

With Rodriguez going on the DL, the Red Sox have recalled Brandon Workman. He will likely work out of the bullpen. However, the Red Sox will eventually need a starter to take the place of Rodriguez in their rotation. Brian Johnson appears to be the early favorite to fill the vacancy. Johnson has two starts for the Red Sox this year, including a complete game shutout last weekend against the Mariners.

Even if Johnson continues to be a suitable rotation replacement, the injury to Rodriguez is potentially a significant loss for the Red Sox. There are questions about every everyone in the rotation other than Sale. But with his performance over the first two months, Rodriguez helped to stabilize Boston’s rotation. For now, the Red Sox can only hope that Rodriguez will not be on the shelf for an extended period of time, which would be a devastating blow to their season.