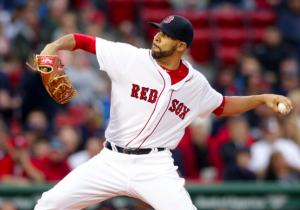 After missing nearly two months of the season with an elbow issue that popped up early in spring training, Boston Red Sox ace David Price is finally ready to make his 2017 debut. The Red Sox announced on Thursday that Price will make his first start of the season on Monday when the club begins a road series against the Chicago White Sox.

Monday’s start will come more than three months after Price first experienced elbow pain following a simulated game. Price was cleared of any issue that would have required him to undergo surgery, although his recovery was slower than expected. As a result, this will be just the second time since 2010 that Price fails to make at least 30 starts in a season. Nevertheless, Price is happy to finally be back with his teammates.

“Excited, just to be back here,” Price told reporters on Thursday. “There’s not a better feeling. You can’t replicate it anywhere else. To be back here with my teammates, that’s a good feeling.”

However, there could be some concern with Price, who struggled in two minor league rehab starts. In two starts at triple-A, Price threw just 5.1 innings, giving up nine runs (six earned) on 12 hits. He needed 89 pitches to get through 3.2 innings on Wednesday, but the lefty didn’t seem bothered by the rough outings in the minors. In fact, he views it as proof that he’s ready.

“A lot of pitches, in a short amount of time,” Price explained. “I think that is more of a test to being healthy as opposed to going out there and throwing five or six (innings) in 90 pitches. To do what I did in both of my rehab outings, I don’t think you can do that if you’re not healthy.”

With three months past since the initial injury and Price struggling in his two rehab starts, no one would have blamed the Red Sox for giving the lefty one or two more minor league starts before bringing him back to the majors. But the club has no reservations about rushing Price back just a little.

“We were able to get his pitch count to nearly 90 last night, which was the goal all along,” Red Sox manager John Farrell said Thursday. “Physically, he feels great, and his return to us will give us a definite boost. Hopefully, it allows us to even out some of the performances within the rotation. Monday is his turn, and he’ll be back with us.”

Without Price, Boston’s rotation is in the bottom half of the American League in ERA, despite fellow lefties Chris Sale and Eduardo Rodriguez having outstanding seasons. Rick Porcello has failed to recapture the Cy Young form he had last season while Drew Pomeranz has been inconsistent. The Red Sox have also lost knuckleballer Steven Wright to a season-ending injury and have struggled to fill the fifth spot in the rotation, which should no longer be an issue now that Price is back, assuming he and everyone else can stay healthy.

Perhaps most importantly about Price’s return is that he knows how important he can be to the Red Sox, especially since the team is yet to hit its stride. Boston, despite holding a lead for the second wild-card spot, sits behind both the Yankees and the Orioles in the AL East.

If nothing else, the Red Sox have done well to tread water amidst a slew of injuries to key players, most notably Price. Now that Price is returning from the DL, the Red Sox finally have the rotation they envisioned at the start of the year, save for the absence of Wright, which should give the team an emotional boost as well as a physical one. Of course, with Price back in the mix, it’s one fewer excuse for the Red Sox not living up to expectations, putting pressure on Price to be a difference maker for Boston as soon as he steps back onto a major league mound.