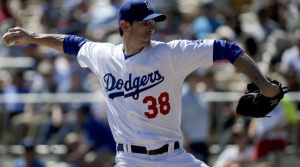 A starting rotation in desperate need of help is about to get some. After undergoing Tommy John surgery in April 2015, Brandon McCarthy is ready to make his return to the big leagues and hopefully provide a much-needed lift for the Los Angeles rotation. The Dodgers announced Friday that McCarthy will be activated on Sunday, when he will make his season debut against the Colorado Rockies. The announcement came on the same day that the team officially placed ace Clayton Kershaw on the 15-day DL with a herniated disk in his back.

Kershaw’s injury gave the Dodgers five starting pitchers on the DL, three of whom have not pitched in the majors all season, including McCarthy. The injury to Kershaw may have compelled the Dodgers to expedite McCarthy’s rehab process just a little. “We kind of sped it up a bit because of the circumstances,” explained manager Dave Roberts. “But Brandon’s excited to get back, and we expect him to pitch well on Sunday.”

McCarthy has made four minor league rehab starts over the past month, three coming in A-ball and one in triple-A, although it was previously expected that he would make at least one more. Over those four starts, McCarthy has thrown 13.2 innings, posting a 4.61 ERA. He pitched five innings in a start in A-ball on Monday. He threw 72 pitches in that start, and Roberts said he will have no limitations on Sunday.

McCarthy’s return will help the Dodgers considerably. On Friday, Roberts talked about the depth the Dodgers have shown in the pitching department this year. “Without it, I don’t know where we’d be. Guys have had to step up certainly. But we’ve really tapped into starting pitching depth,” he said. “It is nice to get one of our guys coming back. Hopefully we get more of that.”

Earlier in the week when the Dodgers knew Kershaw was headed to the DL, the team made a trade for Bud Norris, who threw six shutout innings and earned a win in his Dodgers debut Friday night. McCarthy’s return to the rotation and the acquisition of Norris will give the Dodgers six starters, although at some point the team will have to either move 19-year old Julio Urias to the bullpen or option him to triple-A in order to manage his innings. Urias was scheduled to pitch Sunday, but has been pushed back to Monday to make room for McCarthy.

Meanwhile, Hyun-jin Ryu may be ready to rejoin the Dodgers after the all-star break. Ryu hasn’t pitched in the majors all season, but his far along in his rehab, pitching six innings in a minor league game Friday night. Barring a setback, Ryu could be back in the majors within a couple weeks. Another injured pitcher, Alex Wood, who hasn’t pitched since the end of May, said Friday that he is on track to rejoin the Dodgers in early August.

Help is on the way for the Dodgers, and not a moment too soon. A timetable for Kershaw’s return is still uncertain, but the addition of Norris and McCarthy and eventually Ryu and Wood could make it easier for the Dodgers to deal with the absence of their ace. Norris proved to be a positive addition in his Los Angeles debut Friday night, and on Sunday McCarthy will get his chance to return to the mound and help the Dodgers right the ship.