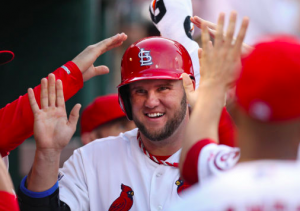 Just days after losing first baseman Freddie Freeman for 10 weeks because of a broken wrist, the Atlanta Braves have found his replacement. The Braves have acquired left-hand hitting slugger Matt Adams from the St. Louis Cardinals in a trade completed Saturday night. Atlanta also received cash considerations in the trade and sent the Cardinals 19-year old corner infield prospect Juan Yepez to complete the deal.

Replacing Freeman for the next 10 weeks seemed to be an impossible task for the Braves. Freeman has been one of the best hitters in baseball over the last handful of years, and he’s taken it to another level this season. Before the injury, Freeman was hitting .341 with 14 home runs, helping him post an OPS of 1.209.

No matter who the Braves get to fill in for Freeman, there was bound to be a massive drop-off in the production they get at first base. However, acquiring Adams to replace Freeman is about the best the Braves could have hoped for, especially considering how inactive the trade market is this time of year.

The 28-year old Adams has displayed decent power throughout his career and has been productive while playing a part-time role with the Cardinals this year. This season, he’s hitting .292 with an OPS of .735 but has just 48 at-bats on the season, as he’s only started two games at first base while playing behind Matt Carpenter and five games in left field, a position he’s only started to learn.

Adams does represent a considerable step down from what the Braves were getting from Freeman, but he’s undoubtedly better than all of their internal options. Within hours of announcing that Freeman would be lost for more than two months, the Braves signed James Loney to a minor-league contract. However, while Adams isn’t as strong as Loney defensively, he offers far more upside offensively, especially in the power department.

“We wouldn’t have signed James Loney if we thought the trade would happen,” said Braves GM John Coppolella. “Now that we had a chance to get a player like Matt Adams we feel it’s a way it’s going to help make us a better club for right now.”

Coppolella also notes that because Adams has started to play left field, there’s a chance for him to stay in the lineup once Freeman returns. Of course, Matt Kemp is currently patrolling left field for the Braves, and he’s been nearly as good as Freeman this season.

“We hate to trade prospects but this is something for our players, for our fans,” Coppolella added. “I think that our ownership really stepped forward here to take on money and give up a really good player. We are trying to win right now. We’ve played really good the past two weeks. We feel like we have a chance to win each night and this will help make us better.”

For Adams, the trade should open the door for more playing time. He started 69 games at first base for the Cardinals last year, but he wasn’t going to get nearly that much playing time this year after the Cardinals rearranged their infield with Carpenter at first base. At least until Freeman returns later in the season, Adams should be an every-day player.

“It’s tough,” Adams said after learning about the trade. “I have a lot of great relationships with a lot of guys on this team. But looking at it, it’s the best thing for my career. I’ll be able to go over there and join another great organization and be able to play every day. But I can’t thank the Cardinals enough for the opportunities they gave me and the trust they had in me. It was a great run. I’m just happy to be able to get out there and play every day.”

Ultimately, this trade has a chance to work out for all parties. The Cardinals were underutilizing Adams and should be just fine without him, especially with Jhonny Peralta and Stephen Piscotty returning from the DL. Meanwhile, Adams will have the opportunity play every day, and while he doesn’t quite measure up to the man he’s replacing, the Braves have a suitable replacement in place for the injured Freeman.