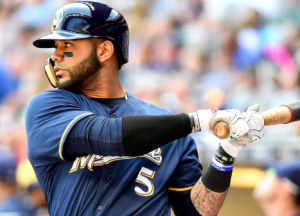 Milwaukee Brewers second baseman Jonathan Villar has paid the price for making a great defensive play. One day after Villar made a highlight-reel diving stop, Villar has been placed on the DL with a lower back strain. To fill his spot on the roster, the Brewers have called up their top prospect, center fielder Lewis Brinson.

Villar robbed Arizona catcher Chris Herrmann of a hit Friday night, lunging to stop a bouncing ball. He got up to make the throw but then immediately fell to the ground in obvious pain. He was removed from the game, although X-rays came back negative. However, he continued to experience back spasms when he woke up Saturday morning, prompting the Brewers to place him on the DL.

“He’s pretty sore today,” Brewers manager Craig Counsell said of Villar Saturday. “Really, we wanted to check on how he was doing this morning. He was pretty sore when he got out of bed, so that precipitated the DL move. It’s going to be a little while before we find out how he recovers.”

Before the injury, Villar was having a rather disappointing season. After a true breakout season in 2016, Villar is hitting just .213 with an OPS of .626 this year. However, he has recently shown signs of getting things turned around. Villar is also making the transition from shortstop to second base, which may have had a negative impact on his offense.

Counsell says that the team is hopeful Villar heals fast and can come off the DL in 10 days. But it’s too soon to tell how long it’ll take for him to recover. Hernan Perez and Eric Sogard figure to fill in for Villar while he’s out. Sogard has not stopped hitting since being called up last month, albeit in a part-time role. Perez, meanwhile, has started games at six different positions and is having his most productive offensive season.

The injury to Villar is obviously a setback for the Brewers. But the addition of Brinson, the team’s top prospect, may provide a boost. Counsell hesitates to say that Brinson will be an everyday player. But with center fielder Keon Broxton going through a slump, Brinson may have a chance to supplant himself as Milwaukee’s regular center fielder. Prior to his promotion, Brinson was hitting .312 with an OPS of .900 at triple-A.

“(Brinson) is a member of the position player unit and we’ll get him in there,” says Counsell. “We’re able to do some different things with matchups and versatility, so we’ve got options. That’s how I’ll treat it. I’ll try to put everybody in the best spots to succeed.”

Aside from Broxton’s recent struggles, the Brewers are also playing without Ryan Braun, who remains on the DL with a calf injury. This has created some openings in the team’s outfield, especially now that Sogard and Perez will have to fill in at second base while Villar is out. But Counsell appears confident that the team’s young players are ready to fill important roles and contribute.

“This is where (GM) David (Stearns) and the guys have put us in such a good position. I don’t feel like we’re losing anything here,” said Counsell. “We’re calling up really good players. They’re young players, haven’t been in the big leagues and are inexperienced, but they’re very talented players.”

The Brewers have arguably been the biggest surprise in baseball this season. They hold a tight lead in the NL Central, which is something few would have predicted at the start of the season. Injuries to Villar, Braun, and Matt Garza pose a challenge for the Brewers. But the ability to call up young talent like Brinson has a chance to keep the Brewers at the top of the NL Central.