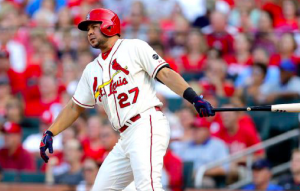 The St. Louis Cardinals have done a great job of persevering through some early-season struggles and injuries and putting themselves back in the thick of the NL Central race. Not only have the Red Birds have won nine of their last 13 games, but they are about to get a couple key players back from the DL. The Cardinals activated infielder Jhonny Peralta from the 10-day DL on Friday, and they hope to do the same with outfielder Stephen Piscotty in the days to come.

The 34-year old Peralta has missed nearly a month of action after being placed on the DL in April with an upper respiratory infection. He played in just eight games early in the year, going just 3 for 25, perhaps because he was struggling with the illness. However, in three rehab games at triple-A, Peralta was 4 for 11 with a double, appearing ready to hit the reset button on his season.

Unfortunately for Peralta, the Cardinals may not have room for him in their starting lineup, forcing him to fight to get back on the field. Aledmys Diaz, despite a noticeable decline in his numbers from last season, continues to be the club’s everyday shortstop. Meanwhile, Jedd Gyorko has had an explosive season since taking over for Peralta at third base. After making waves with 30 home runs last year, Gyorko is currently hitting .331 with seven home runs, posting an OPS of .976.

It’s hard to imagine the Cardinals going out of their way to make room for Peralta on the left side of their infield, likely relegating him to a bench role. Peralta did start three games in left field with the Tigers in 2013. However, he would be a defensive liability out there. Moreover, Tommy Pham has done an exceptional job of playing left field over the past couple of weeks since Piscotty went on the DL.

With Pham playing so well, there’s no need for the Cardinals to rush back Piscotty from the strained hamstring that sent him to the DL earlier this month, especially after a slight setback on Thursday. However, they will be glad to be getting him back, potentially turning outfield depth from a weakness to a strength given the way Pham has played lately.

Much like Peralta, Piscotty may not be guaranteed a spot in the everyday lineup once he returns. Nevertheless, he should find a way to share playing time at the corner spots with Pham and Randal Grichuk. The return of Piscotty could also make it easier to give Dexter Fowler more days off. Fowler has been banged up himself over the past few weeks and has been less productive against left-handed pitchers. With Piscotty back, the Cardinals will have the option of sitting Fowler against lefties and using three right-hand hitting outfielders in their lineup.

Even if Peralta and Piscotty don’t immediately return to the every-day lineup, they will undoubtedly strengthen the St. Louis bench and add some much-needed depth, particularly in the outfield. The Cardinals survived a rough start to the season and now look like genuine contenders in the NL Central. Part of staying in contention will be the team’s health, which was a huge problem for the club last year, and it seems like the Cardinals are playing well and getting healthy at the same time.