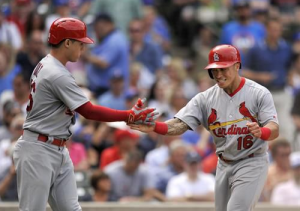 For much of the season, it has looked like the Chicago Cubs would run away with the NL Central. However, over the last three days, the St. Louis Cardinals proclaimed “not so fast.” The Cardinals beat the Cubs in a Wednesday matinee to complete a three-game sweep of their division rivals. Doing so pronounced the Cubs as human and gave the Cardinals just a little bit of hope that they can continue to close what is now a 9.5 game deficit in the division.

Perhaps the most impressive aspect of Wednesday’s win for the Cardinals is that it came against Jake Arrieta, the second loss he’s suffered in his last four starts. Granted, most of the damage was done after Arrieta left the game, but St. Louis hitters were able to get his pitch count up and force him to exit after five innings. Meanwhile, Michael Wacha had a strong outing for the Cardinals, albeit against a Chicago lineup that was missing the injured Dexter Fowler and lost Anthony Rizzo and Miguel Montero midway through the game because of injuries.

With the three-game sweep, the Cardinals now hold a 5-4 advantage over the Cubs in the season series, although the two will see each other plenty of times between now and the end of the season. With the Pittsburgh Pirates spiraling out of control, the Cardinals may be the only team in the NL Central with a chance to catch the Cubs, making the series sweep all the more important.

Chicago may be more or less on cruise control at this point in the season, especially with the all-star break fast approaching, but the Cardinals are still pushing to put themselves in a favorable position, and the St. Louis players recognize the significance of getting the sweep. “This is a big series for us,” said Matt Carpenter after the game. The three-game winning streak has also pulled the Cardinals within half a game of the second wild card spot.

After the game, St. Louis manager Mike Matheny told reporters that he does his best not to look at the standings. Matheny explained, “It’s just not allowing me to fall into the trap, the trap of either being content or being overwhelmed.” Obviously, there’s little chance of Matheny being content with where the Cardinals sit at the moment, but with the deficit in the division under 10 games with more than half a season left to play, he doesn’t need to be intimidated either.

The Cardinals now have the momentum and confidence necessary to continue to gain ground on the Cubs; they simply have to keep on winning in order to put pressure on Chicago. After an off day on Thursday, St. Louis heads to the west coast to being a weekend series with the Seattle Mariners, a team that is currently going through immense struggles brought about, at least in part, by a slew of injuries. This creates the perfect opportunity for the Cardinals to build off of their important and impressive three-game sweep of the Cubs and close the gap in the NL Central even more.