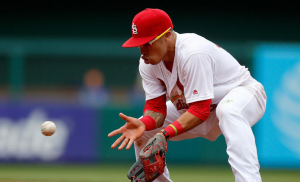 Before the season, the St. Louis Cardinals sending second baseman Kolten Wong to the minors would have seemed unimaginable, as the team team had just signed him to a five-year deal worth $25.5 million. However, that is exactly what the Cardinals did on Monday, optioning Wong to triple-A with the intention of activating Jhonny Peralta from the DL in time for Tuesday’s game against the Cincinnati Reds.

Wong has struggled mightily this season, performing well below the standard he’s set for himself over the past two years, during which time he appeared to establish himself as the Cardinals’ second baseman of the future. St. Louis all but confirmed that position when they offered him the five-year contract. But Wong has not responded well to inking that big-money deal, hitting just .222 and posting a disappointing OPS of .591.

Of course, Wong being demoted is about more than his poor performance. Peralta is finally ready to return after tearing a ligament in his thumb during spring training. The Cardinals need to get his bat back in their lineup, but they can’t do it at shortstop with the way Aledmys Diaz has performed this season. Diaz is hitting .328 with eight home runs and 16 doubles, practically coming out of nowhere to become one of the top Rookie-of-the-Year candidates in the National League.

With Diaz establishing himself at shortstop, the best place for Peralta to play is third base, which will in turn force St. Louis to move Matt Carpenter to second base. Carpenter is having the best offensive season of his career, and while he’s played little second base since 2013, he can handle the position better than if the Cardinals were to try Peralta there. Thus, Wong is forced out of the St. Louis lineup.

As odd as it will be to have a player with a $25 million contract playing in triple-A, Cardinals GM John Mozeliak says he wants to get all the players involved in this mid-season positional shift to get regular at bats, and it would be difficult for Wong to do so if he were to stay in St. Louis. It’s not the ideal situation for Wong, but it’s a chance for him to reset his season after a disappointing two months, and get himself right in case the Cardinals need him later in the season.

For the Cardinals, the decision to demote Wong could not have been taken lightly, but it was necessary to help their season. Peralta is a better offensive player than Wong, especially based on what Wong has done so far this season. If the Cardinals have any hope of cutting down their 10.5 game deficit in the NL Central and getting within striking distance of the Chicago Cubs, they need to find the best possible lineup and stick with it. At this point, that means Peralta gets to play and Wong has to go.