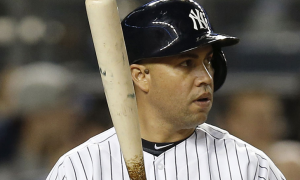 It seems with each passing day the New York Yankees are more and more likely to find themselves out of contention the second half of the season, actually making them sellers at the trade deadline. If that ends up being the case, Carlos Beltran will be one of the most sought after players on the market and a useful trade chip for the Yankees. However, the 39-year old Beltran says he would prefer not to be traded, and instead wishes to play out the season in New York.

“I live in New York. I love playing in New York,” Beltran said Sunday before the team’s win against the San Diego Padres. “I think I’ve proved that I can play in New York. I love the challenge, man. I’ve been here three years. I love the team, love the guys around. I’ve gotten the opportunity to get to know different players that I never got the chance to play with. We feel like we get along well. We have good chemistry as a team.”

Beltran believes the Yankees are still capable of getting things turned around and putting themselves in a position to make the playoffs. Of course, Beltran will likely play a big role in any kind of second half playoff push. Despite missing time lately with a tight hamstring, Beltran is hitting .298 on the season with 19 home runs. His .913 OPS is his highest since 2011, a season in which the New York Mets traded him at the deadline to the San Francisco Giants.

Obviously, Beltran has some experience being in this situation and knows the drill. He also has a partial no-trade clause in his contract that will allow him to block a trade to 15 different teams. However, he still understands that in the end he may not have a say in what happens. “At this point, it’s not in my hands. The team is going to do whatever they’re going to do. My concentration is to come here and try to perform, try to help the team win.”

Beltran hopes to return to the lineup, at least as the designated hitter, on Monday when the Yankees begin a series with the Chicago White Sox. At that point, if the Yankees have any kind of run in them that will put them in contention and prevent them from being sellers at the deadline, it needs to start. The organization wants to avoid throwing in the towel and becoming sellers at all costs, but the Yankees may not have a choice, as the team is still a game under .500 with less than a month until the trade deadline.

Beltran says he wants to stay in New York, and clearly he’s done his part to make that happen. But if his teammates can’t give him some more support and put the Yankees in a position to make the postseason, the team may have no choice but to use him as a trade chip.