Carlos Gomez To Miss 4 To 6 Weeks with Hamstring Injury 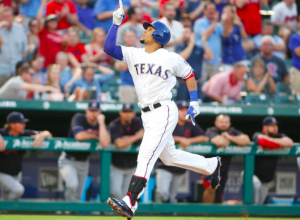 Just when the Texas Rangers start to get things moving in the right direction with six straight wins, they get hit with another injury to a key player. The club announced Monday evening that center fielder Carlos Gomez will miss 4 to 6 weeks with a hamstring injury. Gomez suffered the injury while scoring from second base on a ground out to third during Sunday’s win over Oakland. The Rangers will formally place Gomez on the DL Tuesday.

“I (went) into a slide, and when I realized the bat was on the plate and the catcher not in the right position, I tried to (get more) speed, and it’s how my leg (got hurt),” Gomez said, explaining the play on which he was injured. “I go full-speed, and when I see I don’t have time to slide because I’ll get hurt, I tried to accelerate again and felt it.”

The injury comes at a bad time for Gomez, who’s putting together a decent season but has started to heat up recently, coinciding with the team’s current winning streak. Over his last four games, Gomez is 4 for 14 at the plate with three doubles. On the season, Gomez is hitting .246 with an OPS of .754, which is far better than how he started last season while still with the Houston Astros.

Aside from the offense he’s provided recently, the Rangers will also miss Gomez’s defense in center field. One inning before suffering the injury, he made a spectacular diving catch. He’s been one of the team’s most consistent performers this season and finding a way to replace him for at least a month will be no easy task.

“Carlos has been a key player for us,” says shortstop Elvis Andrus. “Not only getting on base and the running game, but defensively, he’s a game-changer, making so many plays this year.”

With Gomez out, the Rangers are likely to shift Delino DeSheilds Jr. to center field. DeShields has started to get most of the playing time in left field recently and shouldn’t be much of a drop-off defensively from Gomez. However, while DeShields brings plenty of speed to the top of the lineup, he doesn’t have as much power as Gomez brings to the table.

With DeShields shifting to center field, the Rangers are left with Ryan Rua as the primary right fielder. Rua was productive in a part-time role last season but is hitting just .169 with a .510 OPS this year. Shin-Soo Choo, who has been the team’s primary DH this year while starting just nine games in the outfield, could see more time in the field to give the Rangers more flexibility in the outfield. However, as long as Joey Gallo is filling in at third base for the injured Adrian Beltre, the Rangers don’t have an obvious replacement for Choo in the DH spot.

The Rangers are likely to call up either Jared Hoying and Jurickson Profar to fill Gomez’s spot on the roster. Either could partner up with Rua in left field in a straight platoon. However, Hoying hit just .217 with the Rangers last year, while Profar had immense struggles earlier in ths season with just five hits in 37 at-bats (.135). Neither offers any guarantees to produce consistently.

However the Rangers end up replacing Gomez, it’s going to be a significant loss for the team. Texas has built a lot of momentum over the past week to get back within one game of .500, and Gomez has been an important part of making that happen. It now appears as if the Rangers will have to overcome another injury in order to keep up their forward momentum.