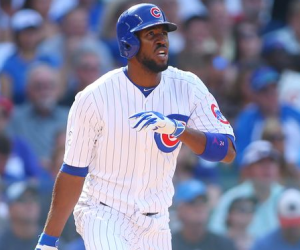 The Chicago Cubs haven’t faced many setbacks in 2016, but they experienced one Monday night when they placed outfielder Dexter Fowler on the 15-day DL. The team does not consider the injury to be serious, but after Fowler left Saturday’s game against the Pittsburgh Pirates with discomfort in his right hamstring and missing Sunday’s game, the Cubs felt it was best to place Fowler on the DL and allow the injury to fully heal.

“We thought it was best to back off,” Cubs manager Joe Maddon said on Monday. “There’s no sense in pushing him right now. Talking to the doctors, there was a concern that if you try to push it, it could’ve gotten worse.” Fowler joins Jorge Soler as the latest Chicago outfielder to land on the DL. Kyle Schwarber is also on the injured list, sitting out the entire season with a serious knee injury.

“I hate to put timetables on it but, ultimately, we knew it was going to be something that was going to sideline him for at least the next handful of games, week or so,” said Cubs GM Jed Hoyer. “When that’s the case, playing short-handed for what would be a significant part of a DL stint doesn’t make a lot of sense.” However, instead of calling up an extra position player, the Cubs brought up reliever Carl Edwards Jr., so for the time being Chicago is playing with a four-man bench.

Fowler is currently hitting .290 with seven home runs, three triples, and 19 doubles, putting together arguably the best season of his career. He’s also been the team’s primary leadoff hitter, leaving a void in both center field and at the top of the lineup. Chris Coghlan led off on Sunday, with Ben Zobrist in that spot Monday, so it appears that Maddon has multiple options to fill the lead off spot while Fowler is out, but no full-time solution.

In the outfield, Jason Heyward is capable of playing center field, but a majority of the time may end up going to rookie Albert Almora Jr., who was brought up when Soler went on the DL earlier this month. Almora has 10 hits in his first 30 big league at bats, including five doubles, but he may now be asked to play every day, with Heyward staying in right fight and Chris Coghlan handling left field. Of course, the Cubs also have Matt Szczur, who can play all three outfield positions, as well as the option of moving Kris Bryant or Ben Zobrist to a corner spot and sliding Heyward over to center field, giving Maddon plenty of flexibility.

Even with that flexibility, the Cubs are bound to feel the absence of Fowler over the next two weeks, if not longer. There’s also no timetable for Soler’s return, so it could be at least two weeks until either player returns, which will certainly test Chicago’s outfield depth, particularly Almora, whose presence on the roster has become more of a necessity than a luxury in the wake of Fowler’s injury. Fortunately for the Cubs, they have plenty of breathing room atop the NL Central, currently leading the St. Louis Cardinals by 11.5 games.