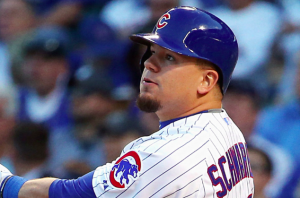 Chicago Cubs left fielder Kyle Schwarber began the 2017 season with so much optimism. He was eager to make up for lost time after missing most of 2016 with a knee injury despite coming back in October and helping the Cubs win the World Series. Cubs manager Joe Maddon had tapped Schwarber early in the spring to be the team’s leadoff hitter, instilling great confidence in the young player. But Schwarber has struggled over the first two months of the season, and it’s gotten to the point where Maddon has said that Schwarber will now be part of a platoon, no longer making him an every-day player.

“If he’s not swinging the bat well against righties, it’s a bad assumption he’s going to do well against lefties,” Maddon explains. “I’m just putting him in a deeper hole by throwing him out there just based on really bad logic. I’m just trying to pick his spots right now to get him going. Once he goes, he’ll play against anybody.”

More than anything, Maddon doesn’t want Schwarber to get frustrated as he watches his batting average continue to plummet. The idea of putting him in a platoon is to put him in a good position to get some hits and get his confidence up before allowing him to play full time.

“My concern when a guy is struggling a little bit is, you don’t want him to get too many at-bats,” Maddon said Friday. “Then it’s really hard to get out of that mental, physical and numerical hole. By not getting him as many at-bats, it will be easy to get back to a number he’s more comfortable with.”

Maddon is resistant to actually using the word “platoon” when talking about Schwarber. But with the way Schwarber has been used, or rather not used, against lefties over the past month, the skipper admits that people are going to use that word to describe the situation. However, Maddon says he’s not yet to the point of having Schwarber sit out an entire series, a tactic he used with Jason Heyward last season. That would also suggest that the Cubs are not considering sending Schwarber to triple-A to help get him back on track.

The silver lining for the Cubs is that they have so much versatility on their roster that there is no shortage of options to share time in left field with Schwarber. Ben Zobrist started there on Friday, while the center field trio of Jon Jay, Ian Happ, and Albert Almora Jr. could all play there if needed. That kind of depth will help the Cubs take their time with regard to getting Schwarber back on the field full time.

Of course, the Cubs don’t have the same comfortable lead atop the NL Central they had last season. There are currently three teams within two games of the Cubs, who hold a slim division lead. A more competitive division could force Maddon’s hand with regard to keeping Schwarber on the bench if he continues to struggle, knowing the Cubs can’t just coast through the summer the way they did last year. Schwarber was expected to be a key part of Chicago’s success this season, and it remains to be seen whether moving him into a platoon will help him turn things around.