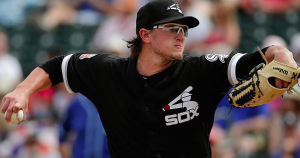 The Chicago White Sox will promote right-handed pitcher Carson Fulmer, the team’s top prospect, prior to getting the second half of the season underway Friday night against the Lost Angeles Angels. The team has not confirmed the news, but reports indicate Fulmer will be promoted Friday and pitch out of the team’s bullpen for the foreseeable future.

The White Sox drafted Fulmer with the 8th overall pick in the 2015 MLB Draft. In college, he helped Vanderbilt win the 2014 College World Series and then return to the championship series in 2015. After being drafted last season, Fulmer threw just 23 professional innings, but the White Sox sent him to double-A to begin the 2016 season. In 17 starts at double-A this year, Fulmer has a 4-9 record and 4.76 ERA with 90 strikeouts over 87 innings of work. He also threw a scoreless inning at the Futures Game last weekend in San Diego.

The plan is reportedly to use Fulmer out of the bullpen the rest of the season and then continue to develop him as a starter next year. Last week, White Sox manager Robin Ventura intimated that Fulmer could be used as a reliever when he first reached the big leagues. “You’re trying to see if a kid can do it, and we did it with Carlos (Rodon) a little bit and Chris (Sale) has done it,” Ventura explained. “You bring ’em up here and you bring ’em through out of the bullpen and see if you can lighten their load a little bit and then see how they handle it.”

Fulmer’s numbers at double-A don’t stand out, but he’s started to shine over his last three starts, including two starts in which he threw seven shutout innings, allowing a total of five hits over those 14 innings. “I’m just getting ahead,” Fulmer said last week about his recent success. “I felt like I fell behind a lot of guys and I paid for it. I’m just coming out with a strike-one mentality and just pounding the strike zone.”

The young righty features a plus-plus fastball that regularly sits in the mid 90s, as well as a power curveball that most scouts grade as a plus pitch. His changeup has made strides as well, becoming an average offering, although he may not need to use it much pitching out of the bullpen. Some scouts doubt his ability to remain a starter long term because he lacks ideal size at 6′ 0” and 195 lbs. However, with elite stuff and a strong competitive drive, the White Sox ultimately envision him pitching behind Sale as the no. 2 or no. 3 starter in their rotation.

With Rodon on the DL with a sore wrist and not eligible to come off until next Thursday, the White Sox may actually need Fulmer to make a start, as the team is currently operating with four starters and doesn’t have an off day until August 1. However, it’s expected that Fulmer will get most of his work out of the bullpen. The White Sox may not guarantee that he’ll remain in the big leagues the rest of the season, but if he pitches effectively and can help them win games, there’d be no reason for the team to send him back to the minors until next season.

At the moment, the White Sox are seven games behind the Cleveland Indians in the AL Central and 4.5 games out of a wild card spot. Fulmer may not be able to make a huge impact, but he could be one piece of the puzzle if Chicago is able to make a second half run. If nothing else, the team will get a sneak peek at a pitcher who could be a big part of its future.