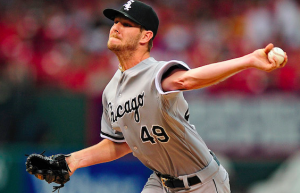 He served his time and now he’s back. After serving a five-day suspension for voicing his displeasure over having to wear throwback jerseys and then cutting up those jerseys, Chris Sale will return to the mound and the Chicago White Sox clubhouse Thursday night when the team closes out a series with the Chicago Cubs at Wrigley Field.

Despite Sale having no contact with his teammates since he was sent home Saturday prior to his scheduled start, White Sox manager Robin Venture expects a “fairly normal” atmosphere in the team’s clubhouse when Sale returns. “I think it’s going to be fine,” Ventura said. “Players always have their teammates’ backs, and that’s no different with our clubhouse. It’s going to be fairly normal, as far as he’s going to be prepared to pitch and our guys are going to prepare to play and it’s going to go from there.”

Outfielder Adam Eaton believes the White Sox will welcome Sale back with “open arms.” Eaton explained: “He’s our teammate. He’s our guy. All of the things that are swelling around about his character, who he is as a player, he’s my brother and I enjoy every second with him on and off the field. He can’t be a better person.”

However, third baseman Todd Frazier wasn’t so sure. “That kind of stuff can ruin a team playing-wise,” Frazier said. “I’ve seen littler stuff put a team in the hole.” But Frazier and company remain optimistic, as the White Sox have won four of their last five games while Sale has been away. “I’m just happy we’re on the roll we’re getting here. You can see it a little bit. You can see it in everybody’s faces. It’s a little more chipper, I guess you can say,” Frazier continued. “We’re ready to go. I think we’re going to get on a great big roll here. I think it’s going to be an exciting time for the White Sox.”

Despite some skepticism, it seems that Sale and everyone else in the White Sox clubhouse are eager to put the incident behind them and just play baseball. The playing baseball part does not figure to be an issue for Sale, who has 14 wins and a 3.18 ERA on the season. “He might have a little more on it than in the past because he’s probably going to come out a little strong, but he has had these situations before where he has had a long layoff,” Ventura said. “He always has been pretty good when he has had a long layoff.”

Eaton added: “I’ll be excited to see him, and I’m sure he’ll be in the same form he’s been the entire year. He’ll go out and perform and be Chris Sale.”