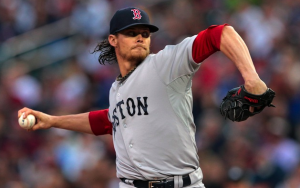 Clay Buchholz believes his time with the Boston Red Sox may soon be coming to an end. Buchholz threw a scoreless inning for the Red Sox Thursday night in what was his first appearance since July 2. That previous appearance was his last as a starter before being moved to the bullpen for the second time this year. He was spoken recently about how he doesn’t feel he has a role on the team, leading him to believe that these are his final days in Boston.

Buchholz has spent his entire professional career with the Red Sox after being drafted by Boston in the first round of the 2005 draft. But his struggles this season have sent him to the bullpen, despite Boston’s inability to find competent starting pitchers at the back end of its rotation. Even in the bullpen, however, Buchholz has been unable to find a role. Thursday was his first appearance in nearly three weeks, and it came with the Red Sox leading 12-3 in the 9th inning.

The lack of opportunities for Buchholz is particularly odd considering the current state of Boston’s bullpen. Both Craig Kimbrel and Koji Uehara have gone down with injuries recently, while Junichi Tazawa just returned from the DL on Thursday. One would think there would chances for Buchholz to pitch out of the bullpen, but Red Sox manager John Farrell has not gone to him.

“If this is the way the team is going to be as far as the rotation part of it… I feel like the guys they’re rolling out there, I don’t have a spot. I’m the odd man out,” Buchholz said when asked about the possibility of being traded. “I’m not sure. I don’t know. Not having pitched in a while I felt like something has be going on.” He’s also aware that when Kimbrel and Uehara eventually return from the DL, he could easily be a roster casualty and could be released by the team.

“He’s in a tough spot, I’ll be candid,” Farrell said, trying to explain Buchholz’s situation. “I don’t want to say it’s purgatory, but as far as baseball he’s in a difficult spot. There was the four-day layover over the break. We’ve played very good winning baseball. We’ve gotten starters deeper into ballgames where the bullpen has been rested. That’s where the decisions have come in.”

There doesn’t figure to be a lot of interest from teams in trading for Buchholz, but considering his track record, there may be a team willing to take a chance on him. The Red Sox don’t appear willing to use him, so they would probably cut a good deal for any team expressing interest in Buchholz. If he’s not traded or released between now and the end of the season, Buchholz is set to become a free agent this winter, unless the Red Sox were to exercise his $13.5 million option for 2017. Either way, Buchholz’s time in Boston does appear to be coming to an end; it’s just a matter of whether the end will come within the next two weeks or in two months.