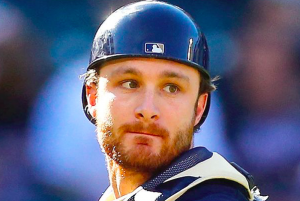 The Cleveland Indians have reportedly reached an agreement with the Milwaukee Brewers to acquire catcher Jonathan Lucroy. Neither team has confirmed the trade, as Lucroy has to approve the deal because the Indians are one of eight teams on his no-trade list. According to Ken Rosenthal, the Brewers would receive four prospects in the deal: catcher Francisco Mejia, shortstop Yu-Cheng Chang, outfielder Greg Allen, and one other lower-level prospect whose name is not yet known.

Lucroy was held out of Milwaukee’s lineup Saturday night after GM David Stearns informed manager Craig Counsell that progress was being made on a potential trade. The New York Mets reportedly made a three-player offer to the Brewers for Lucroy, while the Texas Rangers were also said to have interest. However, it appears the Brewers prefer Cleveland’s offer.

Counsell noted on Saturday that nothing was official. “Let me make it clear: He has not been traded. He may not be traded [Sunday]. He may not be traded Monday,” Counsell said. Lucroy declined to comment before Saturday’s game on whether his no-trade clause was reason for him being out of the lineup.

The Indians have received the least amount of offensive production from the catcher position as any major league team this season. They are also without their regular catcher Yan Gomes, who isn’t likely to return until September because of a separated shoulder. The addition of Lucroy would be a huge addition for a team that’s looking for offense, especially with the uncertainty surrounding the return of outfielder Michael Brantley.

Lucroy would be more than just a rental piece for Cleveland, as he’s under contract next season for $5.25 million, a bargain for the type of numbers he’s putting up this season. Part of the hold up on the trade may be Lucroy asking for financial compensation for waiving his no-trade clause, although Lucroy has spoken in the past about his desire to play for a contending team, so in that sense there would be no reason for him to decline a move to the Indians.

As for the prospects the Brewers will reportedly receive, Mejia is the biggest prize, as he’s considered one of the best catching prospects in baseball. He was promoted to advanced-A ball a month ago, so he’s still a couple years away from the big leagues, but the switch-hitter is having an excellent year offensively and is considered an above-average defensive catcher with exceptional arm strength. Chang is also in advanced-A ball currently and has a high offensive upside for a shortstop. Allen is a speedster who was recently promoted to double-A. He’s considered a strong defensive center fielder and should profile as a leadoff hitter. MLB.com currently ranks Mejia, Change, and Allen as the 6th, 12th, 22nd best prospects in Milwaukee’s farm system, respectively.

Assuming Lucroy approves the trade to the Indians and this deal is completed, it has a chance to change the playoff picture in the American League. Cleveland already holds a comfortable 4.5 game lead over the Detroit Tigers atop the AL Central, but with Lucroy’s bat in their lineup, the Indians will receive a significant offensive boost to further support one of the best starting rotations in baseball. The addition of Lucroy will go a long way towards Cleveland securing a playoff spot and being on of the favorites to reach the World Series out of the American League this year.