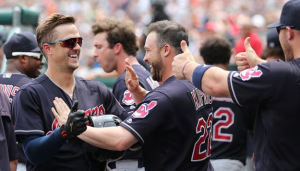 A couple of weeks ago, the race atop the AL Central division was tight and competitive, with four teams separated by just a few games. However, all that has been changed by the Cleveland Indians, who have become the hottest team in baseball. On Wednesday, the Indians extended their winning streak to 12 games with a shutout of the Atlanta Braves. Cleveland’s winning streak is the longest in the majors this season, and a winning streak that has pushed the team’s lead in the AL Central to six games and tied the Indians with the Baltimore Orioles for the second best record in the American League.

Danny Salazar started Wednesday for the Indians, and after a rough beginning to the game, he settled down and threw seven scoreless innings. It was the 10th win of the season for Salazar, who has won his last six starts, making him an important part of Cleveland’s recent success. Salazar admitted after the game that he’s cognizant of the team’s winning streak and feels some pressure to keep it going. “Of course I want to keep going with the streak and that was my main goal today, to try to get a win for the team, and I got it,” he said.

Right fielder Lonnie Chisenhall also played a key role in Tuesday’s win, hitting a two-run home run in the 6th inning to extend Cleveland’s lead. After the game, Chisenhall also talked about his awareness of the team’s win streak. “You try not to think about it too much and just play hard every day,” Chisenhall said. “With the guys running out there who are on the mound for us, it’s not too difficult on the offense, and we’re getting some timely hits when we need them. It’s a fun part of the summer where we’re able to try to separate ourselves.”

Pitching has indeed been a huge part of the Indians winning 12 straight. Of the five pitchers currently in Cleveland’s rotation, all five have an ERA of 3.50 or lower on the season, with Salazar leading the way with a 2.22 ERA following Wednesday’s start. The longer the team’s winning streak lasts, the more likely it is for the Indians to have multiple starters selected to the All-Star Team.

The last six of Cleveland’s wins have come on the road, and that road trip continues Thursday when the Indians begin a four-game series with the Toronto Blue Jays. A win for the Indians on Thursday would tie the longest winning streak in franchise history at 13 games, a feat the Indians haven’t accomplished since 1951.

The way Cleveland’s rotation has performed lately, there’s no telling how much longer the team’s winning streak can last. Even when it does come to an end, the Indians can rest easy knowing that during the streak they have built a substantial lead atop the division, putting them in complete control of the AL Central and on the road towards a spot in the postseason.