Cole Hamels Roughed Up in Return from DL 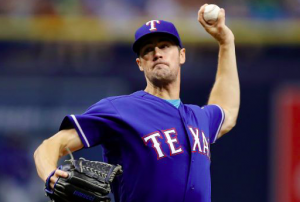 The Texas Rangers waited nearly two months to get ace Cole Hamels back from the DL. Unfortunately, his return from an oblique strain on Monday did not go as he or the team would have liked. Hamels surrendered seven runs over 4.1 innings against the Indians. He also walked four batters and recorded just one strikeout. So while the Rangers are excited to have him back, the lefty didn’t quite provide the lift they were hoping to get from their ace.

“I wasn’t able to really go out there and get in a rhythm,” Hamels said after his team’s 15-9 loss to the Indians. “I wasn’t able to really dive in and get the quick outs. Being able to establish the strike zone early… I wasn’t able to do that. That just kind of leaves you in some pretty peculiar situations because you’re giving guys opportunities to swing away on pitches that are probably going to be around the heart of the zone.”

The worst part of the start is that Hamels was handed a 4-0 lead before he threw his first pitch and couldn’t hold it. Hamels escaped trouble in the 1st inning while giving up just one run. But he also ran up his pitch count early, which ended up hurting him later in the game.

Texas carried a 9-3 lead into the bottom of the 5th, which seemed like a big enough cushion for Hamels. But he once again ran into trouble, getting charged with four more runs and getting just one out before being removed in the middle of the inning. The Rangers still led the game when Hamels left, but their bullpen continued to struggle, ultimately allowing the Indians to score 15 runs.

“He was definitely rusty,” Rangers catcher Jonathan Lucroy said of Hamels. “We were behind in the count, which just isn’t him. That’s not how he pitches. And after that, they just sat and waited on their pitch against the relievers.”

On most days, handing Hamels a 4-0 lead would be enough. Moreover, scoring nine runs should equal a win, no matter how unreliable the Texas bullpen may be. But it wasn’t on Monday, leading to a frustrating loss for the Rangers.

Despite the loss and the disappointing performance, Hamels tried to take some positives from the outing. After two months on the shelf, the lefty was glad just to be back on the mound and is hoping to build off of it.

“I felt good being able to build up and test myself in the situations I was in,” Hamels said. “I would have liked to go more innings. I was able to get my pitch count up to the 90 mark. That’s probably going to be the limit, that 90-100 mark before we can really just let it go and forget about everything that transpired for the last two months. Trying to get over an injury. It is what it is.”

In his five starts before suffering the oblique injury, Hamels was 2-0 with a 3.03 ERA. Those numbers give some hope that the lefty can bounce back. But despite that success, his strikeout rate is well below his career average and his walk rate is up, which is potentially troubling.

The Rangers have been held back by injuries and subpar pitching this season. However, they sit at .500 and just two games out of a wild-card spot as we approach the end of June. The return of Hamels does give them a glimmer of hope, especially if he can team with Yu Darvish atop the Texas rotation. But his first start back from the DL didn’t inspire a lot of confidence that Hamels is ready to help lead the Rangers back to the postseason. The Rangers can only hope Hamels is better the next time around.