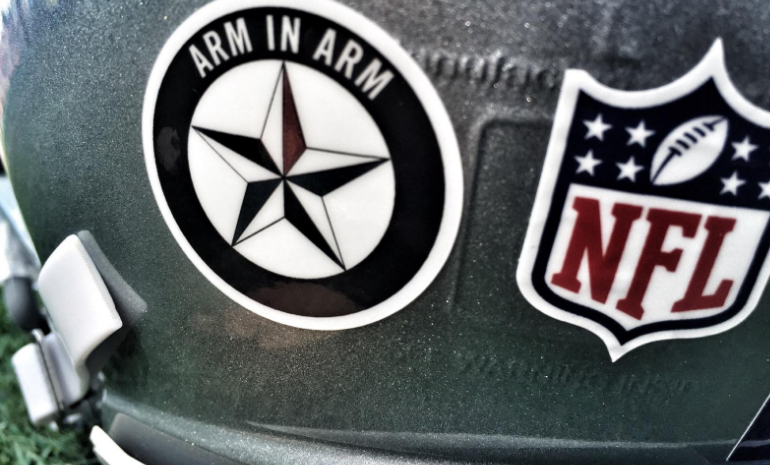 The Dallas community is still recovering from the senseless murder of five of its police officers during a Black Lives Matter rally a few weeks ago. To help the process along, the Dallas Cowboys decided to get involved and show their support for the Dallas Police Department.  So they hosted the families of four of the fallen officers (one declined), Dallas Mayor Mike Rawlings and Dallas Police Chief David Brown in California for the first day of training camp.

A special ceremony was held to open camp that featured many of the team’s stars and coaches walking across the field, arm-in-arm with the family members in attendance, the Mayor, and Chief of Police.

“I would like to say thank you to the Dallas Cowboys for lifting a city up today,” Rawlings told reporters after the brief ceremony (AP). “Those families, those young kids — to be arm-in-arm with a quarterback, a coach or a big lineman — they’ll remember that for the rest of their lives.”

The team had hoped to do more, but it looks like they will not be able to do as much as they wanted. For training camp, they will have special arm-in-arm decals on the back of their helmets to honor the fallen officers and those who still serve. The hope was to wear them during their preseason games and the regular season, but it isn’t looking good.

“Well, I don’t think we’ll be able to do it during the regular [season],” executive vice president Stephen Jones said (SportsDay).

According to reporter Cowboys beat writer Clarence Hill, the team has received permission to wear them during the preseason:

It’s not that the NFL doesn’t respect why the Cowboys want to wear the stickers, but the league has a pretty strict uniform policy that it rarely breaks. When owners or former owners pass away, teams are usually allowed to wear small decals with the initials of someone close to the franchise that recently passed away for the season.

If the league were to start allowing special cause decals like the one Dallas wants to wear, the door would be opened for every other team to request the right to do the same. While that is not necessarily a bad thing, the league has always been very particular about player uniforms. Players can be fined for not pulling their socks all the way up, wearing unapproved cleats during a game, or having a towel that is too long.

Last season, DeAngelo Williams was fined for writing “Find the Cure” on his eye black during a game in support of breast cancer awareness (which his mother passed away from). William Gay was fined for wearing purple cleats in support of domestic violence (his mother was shot by his stepfather when he was 7) (ESPN).

As it stands, the only causes the league likes to recognize are breast cancer in October and military appreciation in November.