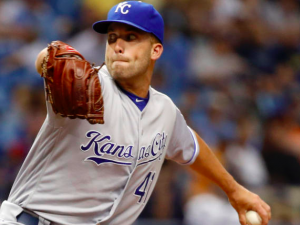 The Kansas City Royals have had a difficult time staying competitive through the first two months of the season, and it’s not going to get any easier for a team that appears to be approaching the end of its window to be a playoff contender. The Royals placed left-handed ace Danny Duffy on the 10-day DL Monday. Duffy is expected to miss at least six to eight weeks after being diagnosed with a Grade 1 oblique strain.

Duffy suffered the injury as he fell to the ground while covering first base Sunday in what turned out to be his worst start of the season. The lefty lasted just 4-plus innings, allowing six runs on nine hits, as the Royals got swept by the Cleveland Indians in a doubleheader.

“When he took that tumble, he didn’t really feel it on the next pitch,” Royals manager Ned Yost explained to reporters Monday. “He felt it on the pitch after that and then gave up a double, and after that, we took him out. He felt it a little bit after the game, but it kept getting stiffer and stiffer and woke up pretty sore this morning. We sent him out for an MRI that showed a Grade 1-plus oblique sprain so he’ll be out a while.”

Prior to Sunday’s ugly outing, Duffy had an ERA under 3 on the season. He has teamed up with fellow lefty Jason Vargas to lead Kansas City’s rotation. Starting pitching has been a strength for the Royals this season, and one of the few reasons why the club is within striking distance of a playoff spot.

Duffy, who signed a long-term contract with the Royals over the winter, has done well to follow up his breakout season in 2016. Sunday’s start was just the second time all season Duffy allowed more than two runs in a start or failed to throw at least five innings.

The Royals haven’t been hurt too much by injuries this season, although Duffy becomes the second member of the starting rotation to land on the DL. Nate Karns, who’s in the midst of a solid season with a 4.17 ERA, was placed on the DL last week amidst forearm trouble. Aside from Vargas, who’s been even better than Duffy this season, all that’s left of Kansas City’s rotation from the start of the season is Ian Kennedy and Jason Hammel, who have a combined record of 1-10 this season.

“This ain’t the first time this has ever happened,” Yost said when asked about the injury to Duffy being deflating for the Royals. “We’re used to this. It’s part of the game. You just make adjustments and move on.”

The Royals will bring up Eric Skoglund to make his big league debut on Tuesday and help fill the vacancy in the rotation. Skoglund is Kansas City’s third-best prospect, according to MLB.com. He’s a tall lefty with a good fastball-changeup combination who has posted a 4.53 ERA in eight starts at triple-A this season.

“It gives us an opportunity to see some of these younger guys with good arms and evaluate where they are, and it gives them a good opportunity to come up and show us what they got,” said Yost.

The Royals remain optimistic about their chances this season, despite entering Monday seven games under .500 and last place in the AL Central. However, with Duffy being ruled out, possibly for as long as two months, the task of getting back into contention just got a lot more difficult. The Royals need their rotation to continue to perform at a high level, but with both Karns and Duffy on the DL, they may not have the personnel they need.

If the Royals are out of contention in July, it’s likely that several core players will be traded before the August 1 trade deadline. Unfortunately, Duffy is unlikely to return much before then, which will force the Royals to climb back into contention without their ace, making a July fire sale a little more likely.