David Price Upset At His Performance in 2016 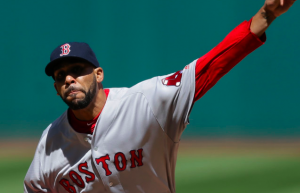 The Boston Red Sox haven’t exactly gotten what they were expecting from David Price when they signed him to the most expensive contract a pitcher has ever received this past offseason, and Price agrees. Speaking in the days leading up to his start Wednesday, which will come in Tampa Bay, the place where he started his big league career, Price called his performance this season “unacceptable.”

Through 16 starts this season, Price has a 4.68 ERA, which is obviously much higher than expected for a pitcher who signed a seven-year, $217 million contract last offseason. The only time Price finished a season with an ERA above 4 was 2009, his first full season in the majors. He’s failed to pitch at least five innings on three occasions this season, including his last outing against the Texas Rangers when he lasted just 2.1 innings, allowing six runs on 12 hits.

A pitcher like Price expects to go at least five innings and keep his team in the game even when he has a bad day; he should never get knocked out in the third inning. Price’s inability to pitch like a true ace and live up to his contract in his first year in Boston has been frustrating for both Price and the Red Sox.

“Just because I don’t display my frustration in front of everybody, it doesn’t mean that I don’t care, by any means,” Price says. “It’s not that you’re OK with it or you accept it. It’s just you learn how to move forward. That’s what I’ve done. I’ve had some tough games, absolutely. I’ve definitely had more tough games this year than I have in any other year, and that’s tough, for sure. I’ve had too many of those bad games, and it’s not acceptable.”

Of course, Price has always prided himself in being a pitcher who’s able to adapt and evolve, giving a great amount of credit to current Rays pitching coach Jim Hickey. “Hickey always had confidence in me to be able to make adjustments throughout the season to go out there and try new pitches,” Price explains. “He understood that I want to evolve, always. And it wasn’t even to the point where I thought velocity was going to leave. It was me wanting to be a complete pitcher, being able to locate my fastball on both sides of the plate with velocity and then be able to throw the other pitches for strikes as well. That was something I wanted for myself and something I worked really hard at.”

But Price has been slow to adjust this season, with his average fastball velocity dropping from 94.2 mph last season to 92.4 mph this season, a significant change in just one year. He admits to having trouble finishing off hitters, and he’s been susceptible to hitters going after him early in counts. His inability thus far to make adjustments to his drop in velocity and the more aggressive approach from opposing hitters has left Price frustrated and still struggling to find himself in Boston.

“[Boston] is definitely a tough place to play, and I knew that coming in,” Price says. “They have high expectations, and I definitely have high expectations for myself. I want to go out there and throw the baseball the way that I know I can and the way that I have in my career. I know I will do that. I’m healthy. I know I’m going to throw big games for us this year and the rest of my career. I know good things are going to happen for me.”

Moving forward, the Red Sox desperately need Price to start pitching like the ace they thought they were getting when they signed him. Boston’s starting rotation doesn’t appear to have the horses to take the Red Sox, who have fallen 4.5 games behind the Baltimore Orioles, deep into October, and part of that falls on the shoulders of the $217 million southpaw. Price calls his own performance “unacceptable,” and for the sake of the Red Sox, that needs to change soon.