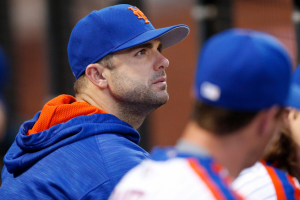 New York Mets third baseman David Wright spoke to reporters on Friday for the first time since undergoing surgery to repair what Wright described as a “significant disk rupture” in his neck. Wright, speaking with a bandage on the front of his neck, said a return to the field for him in 2016 appears unlikely, but that his career is not over.

Wright said that in addition to removing the damaged disk from his neck, the surgery also required fusion, which he says will cause him to lose a small amount of the range of motion in his neck. The damaged disk was putting pressure on his spinal cord and could have led to permanent damage if not treated with surgery, Wright said. He says when everything heals he hopes to be “good as new.”

Wright underwent the surgery on June 16 and says he has an appointment to see his doctor three months after the procedure to check his progress. He says there’s not much he can do in terms of activity during that time. “You can do the math,” Wright told reporters in terms of a timeline for his return to the field. “The next three months, it’s really not doing anything. It’s letting the bones fuse together.”

Doing the math, Wright’s appointment would fall in the middle of September, making a return in 2016 all but impossible, even if the Mets are once again playing deep into October. Wright says he’s not rushing to get back at the risk of his health after his playing days are over. “This is, for me, in my mind, beyond something that can be rushed to try to get back on the baseball field,” Wright said. “The sense of urgency for this in the doctor’s voice was much greater than the sense of urgency when I talked to him about my back last year.”

Last summer, Wright was diagnosed with a chronic back condition called spinal stenosis, a condition he must manage on a daily basis in order to play. He’s unsure how his back may be affected by this period of immobility while his neck heals. “I think it will be interesting to see what it takes to get my back where it was while I was playing.”

Wright reiterates that his health outside of baseball is the most important thing. “I love the game of baseball. I can’t wait to get back out there. But the most important thing for me now is my health and trying to get my neck healed, because if I go and do something that I’m not supposed to, we’re not talking about baseball. We’re talking about something that’s going to affect me later in life.”

Wright says he understands if the Mets need to consider Cuban free agent Yulieski Gourriel as a possible replacement at third base, even if they end up signing him to a multi-year deal. He’s also excited for the team to reunite with Jose Reyes, who may soon be playing third base in Wright’s place. “I love it. He’s a very good friend of mine,” he said of Reyes.

The Mets captain maintains that even knowing about all of the health issues that would come up, he wouldn’t do anything in his career any differently. “I’d do it all over again because I enjoy what I do. And I plan on continuing to enjoy what I do,” he said. We know Wright won’t be playing again in 2016, but his contract runs through 2020, and he says his playing days aren’t over yet. “I plan on coming back and being the player that I feel like I’m capable of being. We shall see.”