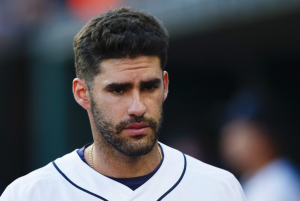 A curveball has been thrown into the tight, four-team race in the AL Central, as the Detroit Tigers have lost right fielder J.D. Martinez to injury. Martinez suffered a fractured right elbow while running into the outfield wall during Detroit’s win over the Kansas City Royals Thursday night. He’s expected to miss four to six weeks. After the game, the Tigers announced that Martinez was going on the 15-day DL and outfielder Steven Moya is being called up from triple-A.

Martinez, who will have a CT scan on the elbow on Friday, knew immediately after colliding with the wall that something was wrong. “He said he heard a pop, or felt a pop,” explained Detroit manager Brad Ausmus after the game. Surgery is not usually required for this type of injury, but that could change depending on the results of the CT scan.

After winning a Silver Slugger award last year, Martinez was enjoying another productive season with the Tigers, hitting .286 with 12 home runs and 19 doubles, so his absence from Detroit’s lineup will be significant. The Tigers will need others to step up while Martinez is on the DL, particularly Justin Upton, who has had a disappointing season, hitting just .229 with a mere four home runs.

“Obviously, it hurts,” said Justin Verlander, who won his seventh game of the season Thursday night. “J.D. is somebody we look to to drive in runs and be one of our middle-of-the-lineup guys. But, this lineup’s got plenty of other guys to step in and I don’t want to say fill that void — he’s matured to be one of the best hitters in the game the last few years and it’s tough to replace — but, I think our team is kind of meshing into what it needs to be.”

At the moment, the Tigers are already moving things around in the outfield with Cameron Maybin listed as day-to-day with a quad injury, forcing Upton to start in center field Thursday and Mike Aviles entering the lineup in left field. That should all but guarantee Moya getting a bulk of the playing time in right field while Martinez is out. Moya was expected to compete for playing time in left field this year before the team signed Upton, but has instead spent most of the year in triple-A.

Moya has made cameos in the big leagues each of the last two years and got 32 at bats with the Tigers earlier this season. “It’s definitely an opportunity,” Ausmus said about Moya. “He’s going to get some at-bats, and hopefully he takes advantage of it, for us and for himself.” He’s currently hitting .298 with 13 home runs and 13 doubles in triple-A. At 6’7,” Moya has plenty of raw power that he’s starting to tap into. He also plays a good right field and has a strong arm.

About Moya, Ausmus added, “If he comes up here and swings the bat similar to how he swung it down in Toledo, maybe we don’t miss a beat,” which sounds like wishful thinking. Moya may be fine, and collectively the Tigers have been good offensively this year, but losing Martinez, who probably won’t return until August, is a big deal for the Tigers, especially in a division in which there is so little separating the top four teams.