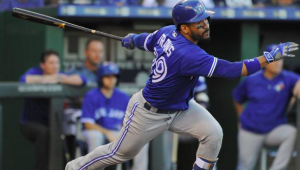 The injuries just won’t stop coming for the Toronto Blue Jays and second baseman Devon Travis. The Blue Jays placed Travis on the 10-day DL Tuesday with a bone bruise on his right knee. It’s the third straight year Travis will miss time with an injury. It’s also yet another injury in a long line of injuries that the Blue Jays have been forced to overcome this season.

The Blue Jays are reportedly concerned about cartilage damage in Travis’ knee. He’ll be sent for additional testing and there’s some concern that Travis could be out for an extended period of time. Travis had problems with the same knee during the ALCS last season. He underwent surgery on that knee in November to remove some cartilage but made it back in time for opening day this year.

“That’s what hurts the most,” an emotional Travis said Tuesday, referencing his long injury history. “You just think about everything you did in the offseason and obviously coming off an injury last year and the year before as well, it’s tough. That’s probably my emotions are running out of me a little bit right now, all those hard days of work, two-a-days and getting to Florida the third day of January, doing all I could to get back on the field because I wanted to be there for the team.”

Unfortunately, Travis has dealt with injuries his entire career. He missed the second half of his rookie season in 2015 with a shoulder injury. Travis then missed the early part of the 2016 season while recovering from surgery on that same shoulder. When Travis has been healthy, he’s typically been a productive player for the Blue Jays. After a sluggish start in April, Travis came alive in May, hitting .364 with an OPS of 1.019. His production during the month of May was key in helping Toronto survive injuries to other players.

Toronto only recently got Josh Donaldson and Troy Tulowitzki back from the DL. The injury to Travis now creates another hole in the team’s infield. Currently, the Blue Jays are also without outfielder Steve Pearce and starting pitcher Aaron Sanchez, among others.

Unfortunately for the Blue Jays, they have little infield depth, and so there figures to be a significant drop-off in production while Travis is out. Darwin Barney is a steady defensive presence but doesn’t provide much offensively, producing a .548 OPS this season. He figures to share time with Ryan Goins, who has been a little better offensively this year, but not by much.

The Blue Jays have actually done an impressive job of persevering through a dreadful start and a string of injuries. Toronto remains under .500 and in last place in the AL East. But they have closed the gap in the division some and are very much in contention for a wild card spot. However, the Blue Jays still have a great deal of work to do and they continue to be plagued by injuries.

Obviously, the injury to Travis will be a little easier to deal with now that Tulowitzki and Donaldson are back from injury. But one has to wonder just how many injuries the Blue Jays can overcome this year, especially if Travis ends up missing a significant amount of time. For now, Travis and the Blue Jays can only hope for a speedy recovery.

“I don’t have time to feel bad for myself,” Travis said. “This is my career, this is what I love to do and this is what I signed up for. I know all this comes along with it and I’ll get through it.”