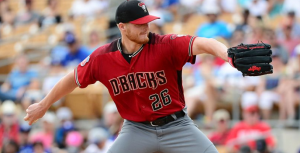 It’s been that kind of year for the Arizona Diamondbacks. Just when they get a player off the DL who may be able to help them turn things around, they lose another key player to the dreaded injured list. The Diamondbacks have activated Shelby Miller from the DL so that he can start Monday’s series finale against the Philadelphia Phillies. However, that move coincided with the team placing outfielder David Peralta on the DL for the second time this year.

Miller went on the DL in late May with a sprained index finger, which the team hopes is to blame for his poor performance early in the season. In 10 starts this season, Miller has a 1-6 record with a 7.09 ERA. Heading into the season, Arizona was planning on Miller being the team’s no. 2 starter, pairing with marquee signing Zack Greinke to lead the starting rotation. But between Miller’s disastrous season and Greinke’s slow start, things have not gone as planned for the Diamondbacks.

However, if Miller can come back healthy and start pitching the way he has in past years, he could become a catalyst for a Diamondbacks turnaround this season. Greinke has been utterly dominant in June, giving Arizona the ace they were expecting when they signed him, while long-time top prospect Archie Bradley has finally started to establish himself as a dependable big league pitcher. If Miller can return to form, the Diamondbacks will have the kind of rotation that could lead them to a much-improved second half.

Unfortunately, the return of Miller is coincided by the loss of Peralta, who goes to the DL after missing nearly a week with a lower back injury. With A.J. Pollock and Chris Owings also on the DL, the Arizona outfield is quite depleted. The Diamondbacks are hopeful that Peralta can return as soon as he’s eligible to return from the 15-day DL, but rarely are there guarantees with back injuries. Pollock doesn’t yet have a timetable on his return, but it won’t be until after the all-star break, while Owings isn’t likely to return to the Diamondbacks for at least another week.

The injury to Peralta will bring youngster Socrates Brito back to the big leagues. The 23-year old hit .226 in a brief stint with the Diamondbacks earlier in the year, but he clearly needed more seasoning in the minors. In 52 games at triple-A this year, Britos hit .289 with five home runs, six triples, and eight doubles, but whether or not he’s ready to succeed at the major league level remains to be seen. Britos should see a fair amount of time in Arizona’s lineup, as outfielders Michael Bourn, Yasmany Tomas, Peter O’Brien, and Rickie Weeks Jr. have been largely underwhelming this year.

Despite his struggles early in the year, the Diamondbacks should be optimistic about Miller’s return to the rotation, if for no other reason than they need him and the rest of their rotation to start carrying the tam if they’re going to climb back into contention. Until Owings, Peralta, and eventually Pollock return from the DL, the Diamondbacks can’t count on too much offensive production coming from their outfield. Thus, Arizona needs Miller and the rest of the pitching staff to step up, now more than ever.