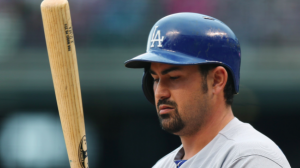 Injury wise, it continues to be one step forward and one step back for the Los Angeles Dodgers. The Dodgers activated center fielder Joc Pederson from the DL Tuesday after a three-week absence. However, simultaneously the club placed first baseman Adrian Gonzalez on the 10-day DL with lower back discomfort. Ironically, this is the second time this season the Dodgers have placed Gonzalez on the DL and activated Pederson from the DL on the same day.

This is the second time Gonzalez has been placed on the DL this season. He also missed two weeks of action in May with elbow soreness. It also happens to be just the second time he’s been on the injured list in his career. Gonzalez was removed from Sunday’s game against the Reds with discomfort in his lower back. The Dodgers have been aware of a problem Gonzalez has had this season with a herniated disc in his back.

Amidst his two DL stints this season, the 35-year old Gonzalez is having the worst season of his career statistically. In 49 games, the Los Angeles first baseman his hitting .255 with just one home run. He showed some signs of life after returning from his first DL stint in May. However, Gonzalez has continued to struggle during the month of June. It appears that father time is finally catching up with the five-time all-star.

“Tried my best to put together good at-bats and keep hitting pitches that I normally hit, but my body’s not letting me get there, so you’ve got to do what’s best for the team,” Gonzalez said after leaving Sunday’s game.

Meanwhile, Pederson returns after missing three weeks with a concussion. Pederson’s concussion stems from an outfield collision with teammate Yasiel Puig. Prior to the injury, Pederson was struggling to get going offensively, hitting .200 with an OPS of .623. Nevertheless, his stint on the DL further challenged the outfield depth of the Dodgers. Andrew Toles is out for the season with a knee injury, while Andre Ethier remains sidelined indefinitely with a herniated disc.

Utility man Chris Taylor played a critical role filling in for Pederson over the last three weeks. Despite going through a mini-slump in recent days, Taylor has been a revelation offensively this season. He entered Tuesday hitting .294 with an OPS of .880.

Pederson figures to return to his role as the everyday center fielder. Despite his struggles early in the year, the Dodgers will look to get him on track offensively, knowing how impactful he can be. However, Taylor is likely to continue to receive regular playing time. With Bellinger likely moving back to first base, Taylor may end up getting a majority of the playing time in left field.

Despite a wide array of injuries to both pitchers and position players this season, the Dodgers have managed to stay in the thick of a tight, three-team race in the NL West. However, Los Angeles continues to struggle to get completely healthy. Also, players like Gonzalez and Pederson, who have spent time on the DL this year, have struggled to produce consistently. This has made it difficult and will continue to make it difficult for the Dodgers to assert themselves in the NL West.