Dodgers Place Justin Turner on the DL with Strained Hamstring 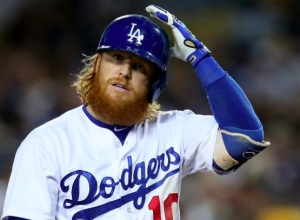 The Los Angeles Dodgers have placed third baseman Justin Turner on the 10-day DL. Turner strained his hamstring during Thursday’s win over the Miami Marlins, and while the team doesn’t believe it’s serious, the Dodgers had little interest in playing short-handed over the weekend while waiting to see if Turner would miss enough time to warrant a trip to the DL. The injury comes at an inopportune time for Turner, who entered Friday leading the majors in hitting with a .379 average.

The injury occurred Thursday while Turner was rounding third base after a single by Yasmani Grandal. He pulled up lame and was tagged out before being helped off the field by Dodgers manager Dave Roberts. The manager was originally worried that Turner had tore his hamstring off the bone. However, the fact that Turner was able to put some weight on his hamstring was a promising sign for Roberts. The Dodgers are hopeful that Turner will only miss a couple of weeks.

Turner becomes the 18th player the Dodgers have placed on the DL this season, as Los Angeles continues to be plagued by injuries. Despite hitting just one home run this season, Turner is having a productive season after signing a four-year, $64 million contract during the offseason to stay with the Dodgers. He has a .379 average and an OPS of .946, helping to anchor the Los Angeles lineup from the no. 3 spot. Fortunately, the likes of Grandal, Corey Seager, and rookie Cody Bellinger are all having strong offensive seasons for the Dodgers and will help make up for Turner’s absence.

While Turner is out, Chris Taylor and Enrique Hernandez are likely to fill in at third base. Taylor is having an exceptional season offensively, hitting .324 with an OPS of .979. Hernandez, meanwhile, is also having a productive year offensively in addition to starting games at five different defensive positions.

Of course, Taylor and Hernandez are currently helping to fill the vacancy at second base with Logan Forsythe one of the many Dodgers on the DL. Forsythe has missed the past month with a broken toe. He’s started to appear in minor league rehab games and should be back with the Dodgers within the next week. But for the time being, the Dodgers will have to survive without half of their starting infield.

The silver lining for the Dodgers is that despite the rash of injuries this year, they began Friday just two games out of first place in the NL West. Los Angeles has already survived DL stints for Adrian Gonzalez, Joc Pederson, and Franklin Gutierrez, and they are almost finished with Forsythe’s extended absence. The Dodgers have also been able to cope with Andre Ethier out indefinitely and losing Andrew Toles for the season, and that’s just the position players.

Turner is merely the next in line to hit the DL. To be fair, he’s arguably the most important player the Dodgers have placed on the DL this season. They hope to have him back as soon as possible, but it remains to be seen how quickly the 32-year old will bounce back from a hamstring injury. Of course, the Dodgers have already persevered through so many injuries this season, what’s one more? Even if it is a player as important as Turner.