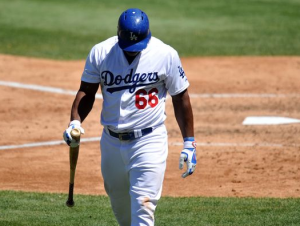 After spending close to three weeks on the DL, Yasiel Puig returned to the Los Angeles Dodgers on Tuesday, starting in right field and going 1 for 3 as the Dodgers beat the Washington Nationals. Puig returns to an outfield that has undergone several changes since he last played on June 2. He also returns with much to prove after a sluggish performance for much of the season prior to the hamstring injury that forced him to the DL.

Puig says he’s motivated to come back and perform after hitting just .237 with five home runs in 53 games before the injury. “I’m working hard with the bat. I’ve always worked hard. I hope that this second half I will do a lot better,” Puig said. “It’s been hard watching from home or from the Minor Leagues and not being able to help my team.”

However, the Cuban outfielder, who has had his share of leg injuries during his time in the big leagues, admits to being a little reluctant when it comes to running. “I hope not to run too much,” Puig said Tuesday. “I hope my teammates can hit the home runs and get the strikeouts. And if I do get a hit, it won’t be a single. It’ll be a double or a home run, so I won’t have to run as much.”

Dodgers manager Dave Roberts, however, doesn’t like the idea of Puig holding back because he’s worried about an injury. “Once he’s here, he’s gotta go up there and play and be who he is,” Roberts explained. When asked about monitoring Puig for potential injuries, Roberts said, “It’s about giving him days off. It’s one of those things where he wants to be there every day, which most players do, but that’s going to be my decision to back the load off a little bit.”

If Puig needs days off to rest his legs, or he continues to struggle offensively, the Dodgers have plenty of other options in the outfield. Trayce Thompson saw plenty of time in right field during Puig’s absence, and despite slumping as of late, has been one of the team’s more productive players. Scott Van Slyke and the recently acquired Wil Venable could also play right field in Puig’s place if necessary, giving the Dodgers plenty of options, although for the immediate future, Puig should be the primary right fielder.

Despite having several alternatives, the Dodgers need Puig to perform the way he did when he burst onto the scene in 2013. Puig showed flashes of being that player in early April, but his performance dropped off considerably after that. Los Angeles has gotten hot as of late, winning five straight games and moving into the first wild card spot. Puig can be a big part of helping the Dodgers to keep that going, but only if he can start to perform and stay healthy.