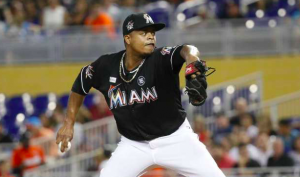 Edinson Volquez stepped onto the mound at Marlins Park Saturday with a heavy heart. Earlier in the day, he posted a picture on Instagram of himself and former teammate Yordano Ventura. Saturday would have been Ventura’s 26th birthday had he not passed away during the offseason in a car accident. With the life and memory of his fallen teammate on his mind, Volquez proceeded to throw a no-hitter against the Arizona Diamondbacks. It was Major League Baseball’s first no-hitter of the 2017 season.

Based on the first play of the game, no one could have foreseen a no-hitter from Volquez. After Arizona leadoff hitter Reymond Fuentes grounded to first baseman Justin Bour, he and Volquez collided while the pitcher was covering the base. For a moment, it looked like Volquez would be done for the day after just one batter. But Volquez recovered and got back on the mound. He then proceeded to pitch nine hitless innings, walking two and striking out 10.

“I think I broke my ankle,” Volquez said with a laugh after the game. “I twisted my ankle a little bit, but I talked to the trainer and told him I feel really good and to just let me go and compete and do my best today like I did. And it was just one of those days. You wake up and you don’t know what’s going to happen in the game. Today I got a no-hitter.”

Volquez admitted after the game that after the 4th inning he spoke to Miami’s trainer about leaving the game.

“I told (the trainer) I don’t feel too good right now,” Volquez recalls. “I might stop pitching. I had a quick inning and I told him just let me go. I feel better now.”

In the end, Volquez is happy he stayed in the game. Despite hurting his ankle in the 1st inning, he was incredibly efficient. Volquez faced the minimum number of batters and needed just 98 pitches to throw a no-hitter against one of the most potent lineups in baseball. He becomes the sixth pitcher to throw a no-hitter in Marlins history and the first since Henderson Alvarez in 2013.

Immediatley after the game, Volquez turned his focus to Ventura, his teammate for two years in Kansas City, as well as former Miami ace Jose Fernandez, who died last September in a tragic boating accident.

“I dedicate this game to Jose Fernandez and Yordano Ventura,” Volquez said. “Ventura’s birthday is today, and this was for them. They’re watching what happened today, and they must be really happy right now. Ventura was one of my best friends. … He passed away … but I’m sure he’s in the right place right now and enjoying this moment.”

Volquez was never teammates with Fernandez, but he was one of the pitchers the Marlins acquired this winter to help replace their fallen ace. Volquez served as Miami’s opening day pitcher this season, an honor that almost certainly would have gone to Fernandez had he not passed away.

Volquez throwing a no-hitter on the same mound that Fernandez once ruled and on Ventura’s birthday is nothing short of perfect. It’s almost impossible to imagine a more fitting tribute to a pair of young pitchers who were once two of the brightest stars in the game. It’s also quite fitting that it was Volquez who delivered the no-hitter, as he will forever be linked to both Ventura and Fernandez.