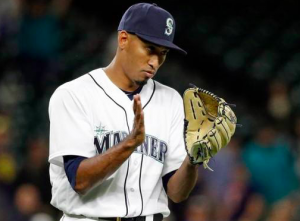 After losing his job as the team’s closer earlier this week, Seattle Mariners flamethrower Edwin Diaz is making progress toward getting his job back. Mariners manager Scott Servais said Saturday that he was impressed by what he saw from Diaz Friday night in two scoreless innings against the White Sox. Diaz is likely to get one more appearance in a setup role, and if all goes well, he could return to the closer’s role, adding some much-needed stability to Seattle’s bullpen.

“We’ll take one more good one and see where we’re at,” Servais told reporters Saturday. “You can see how the bullpen is being managed, we’re trying to match up and see who is available. Next time out there, he could be out there in the ninth. Last night, he did pitch in the eighth and ninth. We needed to pitch him and that’s what the game called for.”

Prior to being removed from the closer’s job, Diaz was struggling with his command, an issue the Mariners believe is mechanical. Diaz has been working with pitching coach Mel Stottlemyre closely over the past week and believes he’s becoming more consistent with his mechanics.

“I feel very confident that if he keeps moving in that direction, he’ll be back doing the ninth inning solo and we can get back to him being our anchor,” Servais said. “That’s what we’re trying to get back to.”

On the season, Diaz has a 4.67 ERA, nearly 2 points higher than it was last year when he burst onto the scene as a rookie, saving 18 games for the Mariners during the second half of the season. He’s also walked 10 batters in just 17.1 innings this season, a much higher rate than last season when he walked just 15 in 51.2 innings.

However, Friday’s outing afforded the Mariners some hope. Diaz allowed just two hits and no walks in two shutout innings. He was also economical with his pitches, getting six outs with just 29 pitches, 20 of which he threw for strikes. Diaz also kept his cool and got out of trouble after a pair of infield hits.

“I was really encouraged by what we saw,” Servais said. “That was one of his better outings of the year, maybe his best. He commanded the fastball to the glove side, he had an idea where it was going. He stepped off the mound a few times and gathered himself and said, ‘This is what I’ve got to do.’ He’s starting to get those checkpoints down so he can get himself back on track. And I thought his slider was good, too.”

Getting Diaz back on track and back in the closer’s role would be huge for the Mariners. Seattle’s pitching staff has the highest ERA in the American League, and the bullpen is the top culprit. The Mariners have seen their rotation devastated by injuries but have pieced things together as best they can. However, the team’s bullpen has been utterly dreadful this year with a league-worst ERA of 5.60. Diaz is not solely to blame for those problems, but not having a closer that can be relied upon isn’t helping.

As it stands, the Mariners are four games under .500 and last place in the AL West. However, the team is currently coping with nearly a dozen players on the DL. If the Mariners can hover around .500 until they start to get healthy, particularly their four injured starting pitchers, they have the talent to make a playoff push the second half of the season. But in order to stick around, the Mariners need their bullpen to be much better than it’s been, and Diaz returning to the closer’s role could be a step in the right direction.