Former NFL WR Chad Johnson May Have A Job With The Cleveland Browns—But As What?

In recent years we have seen a couple of players succeed in getting tryouts and even job offers after tweeting a former coach that was with another team. So when former NFL wide receiver Chad Johnson took to Twitter to hit Cleveland Browns head coach Hue Jackson up for a job it was not surprising.

What may be a little surprising was the type of job he was after. He wasn’t trying to get back on the field but was looking to get onto the sideline—as a coach. Johnson started by tweeting the Browns:

@Browns Can you ask Hue if I can come in & work with the receivers, thanks. 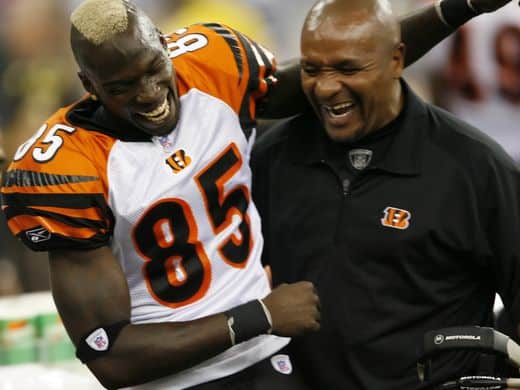 But later said he was going to hit up Hue Jackson himself:

Gonna ask Hue if I can join the Browns coaching staff as a “route running specialist” assistant receiver coach, what’s the worse he can say.

Johnson was a pretty good receiver in his day, but once he lost Carson Palmer during the 2008 season, everything seemed to fall apart. It didn’t help that—at least when he joined other teams—he didn’t work very hard.

Not every good player is capable of turning into a good coach. Many have tried, and the NFL’s intern program makes it possible for teams to try guys out during training camp. Some like it, end up being good and go on to have productive careers. The money is not as good as when they played, but it allows them to remain involved in the game.

For some, the amount of work required and the smaller paycheck turns them away from the profession.

According to Johnson, it appears like Jackson may be willing to give him a shot. Johnson sent this tweet out into the virtual world Tuesday afternoon:

What a blessing Hue Jackson is, see y’all in Cleveland on the 28th, no cleats this time just knowledge

The capacity he will be serving in has yet to be made public. He could be going just to talk to the Browns receivers, or he could be getting a chance to coach. Can he do it? Will he be good at it? Maybe with how he left the game, he’ll be motivated enough to put in the work it takes to be a good coach.

However, it would not be shocking if the Browns were to kick the tires a little and see if Johnson can still play. Cleveland has little experience at wide receiver and even less talent. With Joh Gordon still suspended the most talented receiver on the team hasn’t caught a single NFL pass yet—rookie Corey Coleman. With a questionable quarterback in Robert Griffin III, fans have to be worried about what the offense will look like next season.

If Johnson has stayed in shape and shows that he is willing to work, it would not be a bad idea for the Browns to give the 38-year old a shot. They wouldn’t have to pay him more than league minimum and if he doesn’t work out—no harm, no foul.