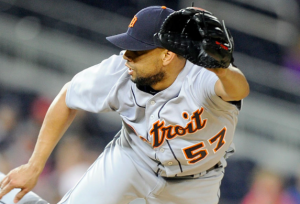 A little more than a month into the season, the Detroit Tigers have made a change in the closer’s role. Tigers manager Brad Ausmus announced Tuesday night that Francisco Rodriguez, affectionately known as K-Rod, is no longer the team’s closer. Lefty Justin Wilson will be Detroit’s closer moving forward, stepping into the 9th inning role for the first time in his career. The decision comes on the heels of Rodriguez blowing back-to-back saves against the Oakland Athletics on Saturday and Sunday, both games the Tigers lost.

“It wasn’t an easy decision in the sense that Frankie’s got a long track record, he’s one of the best closers in the history of the game, over 400 saves,” Ausmus explained to reporters Tuesday. “It’s not easy to tell a guy that’s been so good for so long that you’re taking him out of that role for the time being.”

Officially, Rodriguez has 437 career saves, putting him fourth on the all-time list. However, this season has been a massive struggle for the 35-year old, who appears to be entering the twilight of his career. In 13 appearances, Rodriguez has an ERA of 8.49 with seven saves in 11 opportunities, blowing four saves in a little over a month.

Ausmus says that the move isn’t necessarily permanent and that Rodriguez “couldn’t have been more professional” in receiving the news when the manager called him into his office on Tuesday.

“He’s very accountable,” Ausmus said. “He understands that he hasn’t pitched the way he’s accustomed to, so he took it as well as can be expected. He’s a stand-up guy. He’s an old-school, blue collar-type pitcher. He handled it extremely well.”

In the meantime, Wilson will take over as the team’s closer. Wilson has been solid but unspectacular throughout his big league career, but is in the midst of a potential breakout season this year, posting 1.23 ERA over his first 16 appearances. He pitched the 9th inning in Tuesday’s win over the Diamondbacks, but in a non-save situation.

“For right now and for the time being we’re going to go ahead use (Wilson) to close out games,” Ausmus explained. “Hopefully we’ll get Frankie back into some softer situations, get his command back. Get his stuff back to where it was. Justin Wilson has been our most consistent reliever all year. To me, it’s a no-brainer.”

“I’m excited,” Wilson said of Ausmus naming him the new closer. “Fortunate for the opportunity but it comes at a time when one of my brothers down there is struggling. Frankie’s done an unbelievable job with all of us down there and I just want to see him right but for the time being, just give it what I got in the ninth and have some fun with it.”

The caveat to Wilson being in the closer’s role is that Ausmus may be hesitant to use him too often, which could afford Rodriguez opportunities to close out games and potentially earn back his spot.

“There are use limitations,” Ausmus said of Wilson. “I don’t really like throwing him in more than a couple of games in a row unless pitch counts are real low. I think that will preserve him over the course of the season. Ideally, I’d like to get Frankie into a few games where he can work on some stuff. If he does that and Justin’s thrown a couple of days in a row I might go back to Frankie that third day to close if need be.”

Rodriguez has seen a slight drop-off in his performance in recent years, but he’s really fallen off the rails early this season. It’s possible that it’s a blip on the radar, but it could also be a sign that the career of one of the best closers the game has ever seen is coming to a close. K-Rod first broke into the majors nearly 15 years ago at the end of the 2002 seasons and was utterly electric in the postseason that year at the age of 20, and so it’s possible that he’s starting to run out of gas.

But the Tigers are hoping that Rodriguez, who’s in the final year of his contract, has a little more left in the tank. Detroit has done well to tread water through some injuries over the first month of the season and is now starting to get healthy and hoping to make a move towards the top of the AL Central. That may be difficult with uncertainty at the back end of the bullpen, and so the hope is that Rodriguez can get back on track sooner rather than later.

“Things could turn around,” Ausmus said. “I hope Justin Wilson does a great job as closer but things could go back to the way they were if Frankie reclaims his form.”